-
Today was our travel day on to Burundi. James took us on a short game drive on our way to exiting the reserve, and a first occurred both for us and for him. We saw an aardvark. It’s 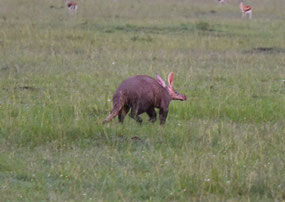 The first entry in the encyclopedia
rarer to see the very nocturnal aardvark than it is to see a leopard. In 13 years as a guide James had never seen one, and here one lumbered right alongside as we slowed down to watch. What a treat that was. 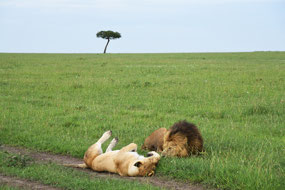 The afterglow
We had a long visit with a pair of lions, a mating pair. In the season they will mate many times a day for up to a week, during which time they don’t eat. So they’re both tired and weak when the estrus is over, but because of the intensity, she usually conceives. We had seen them mating yesterday, today it seemed the magic moment was over. I was able to take a lovely long shot photo of the male on the plain as the sun was rising behind him. 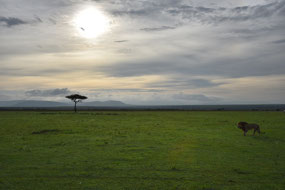 Lion on the Mara plain in the early morning
Back at the Nairobi International airport, we caught an early afternoon flight, two hours long, to Bujumbura, Burundi.
The local pastor, Nathan M, met us at the airport with a 4WD Prado and a driver names Mélance and took us to our hotel, so we could chat, catch up and plan for the next few days. The Passover was celebrated this evening, but the situation is still tense politically, and it is especially dangerous to travel at night. The US State Department has a "Reconsider Travel" advisory for Burundi, the second highest warning. The roads north to where our members live is particularly bad, and potholes are especially dangerous at night. I decided not to tempt the Lord our God, and not try to keep Passover two hours’ drive north.
I sped Nathan on his way to conduct the ceremony near his home close to the Rwandan border, and Marjolaine and I observed the Passover in our hotel room, the first time we’ve done so. It was, as always, very moving, perhaps a bit more so to be alone, and so far from home, in a very foreign environment, but attempting to pursue the mission Jesus gave His disciples starting in 31 AD and down through history.
Tomorrow the work will start on the ground, and early.
Other Entries
-

How exciting to see an aardvark, especially since James had not seen one. Sorry to hear about the dangers difficulties of traveling at this time. We hope the remainder of your trip will be productive and encouraging.

I am enjoying your travel journaling. Much admiration and respect for you and Marjolaine as you travel to these difficult places. I’m glad you all are together on this trip. Prayers for your safety and look forward to reading more about our family and the memories you all are making.