Into the bush to visit new groups

-
This morning Mélance was at the hotel as requested at 7:00 am. This was to be a day of church visits, in fact two new congregations. We will see most all the members together at Mugina for the first holy day tomorrow, so this was just about visiting these groups in their halls – in important personal touch, and hearing their requests for assistance on site. Marjolaine and I were still short on sleep and jet lagged, so I felt she should have a day to catch her breath and she agreed that she would remain at the hotel today.
I should say a word about how new congregations often happen in the region. Much of Christianity in rural Africa springs from individuals who study the Bible and feel led to share their faith and beliefs with others. It’s often spontaneous and not the fruit of denominational proselytizing.  There are many independent groups of various sizes that have no firm connection to a larger body. Those that understand and observe the seventh day Sabbath often keep in touch with each other.
Nathan is known in the region for his beliefs and work, and he’s respected. As people hear of the church and learn what is being done to preach the gospel and care for the people God draws to us, they are curious and some are desirous of having that spiritual and also the physical support we provide. The physical support mostly is just having a decent place to hold Sabbath services out of the rain. It’s usually the leaders of small groups that make contact, and after discussing with the parishioners sometimes most or all of the group want to be associated with us.
There is a fine line to walk for us. We want to do our best to care for those God draws to us, but also to discern between those who are truly called and those who are only looking for financial help in a difficult situation, which describes most of sub-Saharan Africa, without any deeper understanding. It takes patience and perseverance to sort this through, so I move slowly, and observe as carefully as I can. 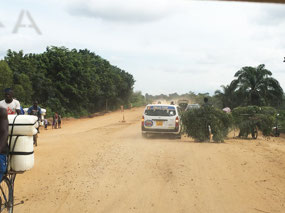 Dusty is the way and many go in by it...
Just after 07:00 Mélance and I started out on the RN (National Route) 5 toward Cibitoke. This road desperately needs to be completely redone, and the project has finally started. Of course things get worse before they get better. There really is no road to speak of, the patchy blacktop has all been stripped out, and there is only washboard dirt, mud and rocks. That meant the first 30 km or so (20 miles) was very uncomfortable and slow going. The Toyota Prado, is tough enough to make the trip, but as part of that package the suspension is hard too. So traps were rattled, bones were jarred, and jerks were herkied, no, actually scratch that last one…. 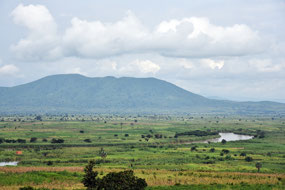 The Rusizi River, the border with the DRC
When we arrived at the Cibitoke provincial line, the road smoothed out. It used to be horrible too, but from this line to the Rwanda border it was resurfaced a few years back, part of an ongoing project to have a decent road the length of the African Rift lakes.  From the provincial line to Cibitoke town is about the same distance we’d already covered, but it took less than half the time.
We met Nathan on the side of the road in Cibitoke and proceeded up past Rugombo and farther north and east to a rural village called Gichacha. We were greeted by a small group in an open sided shelter. The protocol starts with happy hand-shaking and greeting before everyone sits. 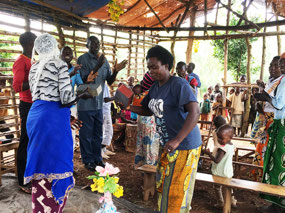 Welcome in Gachacha
There is an additional gesture sometimes included before the actual hand shaking: the left hand will be placed briefly on the shoulder of the person being greeted, while the right hand briefly touches the other’s left arm at or above the elbow. It is a kind of ceremonial embrace with only respectful and limited physical contact. This is often followed by shaking hands, which also often has two parts, at least among men. After a normal western style handshake, the hands will shift upward so that each is clasping the large thumb area of the other hand. If you try it out you will find it feels natural and like a more complete handshake.
One man leads a hymn or two, there is an opening prayer in Kirundi. There may be special music performed by a small group. Then Nathan acknowledges the group, before introducing me for greetings. I pass along best wishes from the HQ office and from other members in Africa, and sit down. Almost immediately I’m invited to give the equivalent of a long sermonette on a Bible topic of my choosing. In this case I talked about the New Testament teaching about the Passover and the Days of Unleavened Bread. Nathan translated into Kirundi phrase by phrase. After about 20 minutes I wrapped up, and everyone seemed very happy. I ask the group to step outside for a photo op which they were happy to do, including some close-ups of the children, whose faces I often find fascinating. 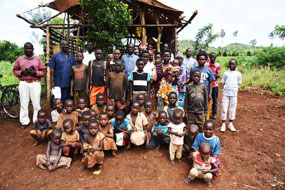 Gachacha group portrait
Before we left, a congregational leader presented their doléance as the phrase is rendered in French. Literally that means complaint or grievance, but it really just means an earnest request. There is often a kind of verbal manipulation built into many of the cultural exchanges in sub-Saharan Africa. If, for example – and this happens a great deal to me, I was asked for some sort of help during a previous visit and I replied that I would think it over or look into the question, I will usually be informed next time around that I had “promised” to help. Similarly presenting a doléance places the requester in an aggrieved, slighted posture, which it is hoped, will improve his chances of a favorable reply. It’s not really done in a cynical way, it’s just the way things are done in the culture. 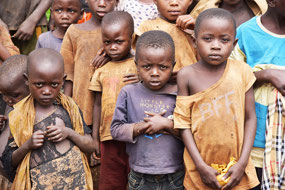 Gachacha children
This congregation had paid 2/3 of the cost of the plot on which the little shelter was built, would we be willing to pay the other 1/3 which comes to about $250. I replied, as always, that I would consider the request and discuss it with Nathan.
We got back in the Prado and retraced our route south to Cibitoke, where another new little group is meeting. The congregation was very excited to have a visitor from afar. We all greeted each other in the traditional manner as we made our way to the mud-brick hall. Again we sang a hymn. They have translations of a number of our church hymns into Kinyarwanda (done in Rwanda) which is close enough to Kirundi that they can use them. 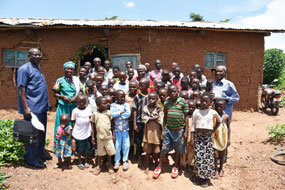 Cibitoke group portrait
But they have never heard the piano accompaniment for the hymns. A member from Rwanda, actually came here and sang them for them a few times, so they could learn the melodies. The melodies have noticeably evolved over time, so that, while they are easily recognizable, there are significant variations. As electricity becomes available we will provide recorded piano accompaniment as well.
After the prayer, Nathan then I gave our formal greetings and introductions, then I gave my long sermonette. We sang again and Nathan prayed. I was presented their doléance, which I could tell from gestures concerned the corrugated tin roof, through which, here and there, I could see sunlight. I told them I would discuss it with Nathan, and they all smiled. 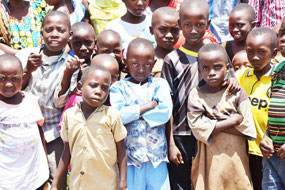 Cibitoke children
By this time it was about 2:00 pm. I took a few group photos. And then we went on our way once again. Nathan headed for home not far away, and Mélance and I bumped and lurched our way back to Bujumbura.
Marjolaine and I will observe the evening together, there are no other members in Bujumbura, and tomorrow will celebrate the day with the whole group in Mugina.
Other Entries
-

Thanks for this very informative blog! I appreciated learning how new congregations often happen, the fine line to walk, the cultural protocol and the doléance. As always, the pictures add a lot to the blogs. Thanks a lot for your work in Africa!

Thanks for the pictures, especially of the children, so sober for the photo. It must be challenging to weigh the requests for assistance and how to work through Nathan to nurture a new congregation.

Praying as always for wisdom and protection for you.