A high day in Burundi

-
Today, the first day of Unleavened Bread, we were ready to leave just after 07:00 for the drive up to Mugina. Traffic was limited and the work on the road had ceased for the Easter weekend, which was good. But the road was still bad! 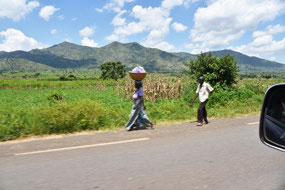 A clear day on the road
We drove past the scenery I’ve come to know by heart, since virtually every day I work in Burundi, I make this trip back and forth. We saw the usual scenes along the side of the road, and had the usual close calls (at least they seem such to me). Burundians have a high tolerance for danger on the road, and it seems to me, very little imagination about what might happen. Pedestrians on the side of the road saunter along carefree while vehicles roar by, at speed, less that a yard away. Parents let their little children watch over littler children playing on the shoulder while the traffic whizzes by. Drivers weave back and forth and play a local version of chicken as they vie for the best surface of a very bad road. This day we had to stop for a jackknifed truck that the police were attempting to sort out. 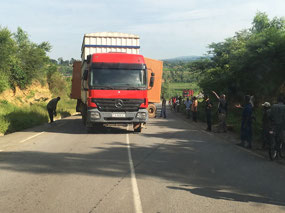 Jackknife!
The Proverbs state twice: “A prudent man foresees evil and hides himself; the simple pass on and are punished.” But to foresee evil, one must have a modicum of imagination, and that does not appear to be plentiful. Of course the Darwin Awards prove every year that this lack is not limited to the developing world… 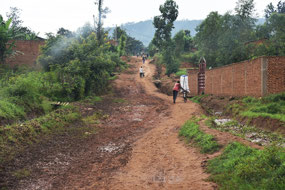 The last stretch to Mugina
The last section of the route, from the surfaced road to Mugina about three miles away was the worst. We would not have passed without a 4WD. It is a dirt road, heavily rutted during the rainy season. The frequent rains turn the road to viscous mud, which is driven into deep trenches by passing vehicles. Between rains the mud dries, leaving an obstacle course or ridges and valleys, which must be negotiated at a creeping pace. Pedestrians can often move more quickly than motorized vehicles.
But we made it! We pulled in a few minutes before 09:00 the appointed time for the holy convocation. In the event we didn’t actually start until 09:30, which I expected, but as a matter of principle I try very hard to arrive at the appointed time. And once in a while, it means the difference between getting on a flight and not.

Preparing to start the service
Once in northern Cameroon, because we had arrived at the airport two hours prior to a flight, I and my traveling companion were at the front of the line in the departure terminal for a severely overbooked flight. Actually a politician had ordered the pilot (of the national airline) to skip the previously scheduled stop because he was in a hurry. What a public servant! So passengers hadn’t been allowed to deplane at their stop, therefore there were only four free seats instead of 20. When the door was opened we raced (literally) to the plane and up the stairs. Because we had been on time and therefore at the front of the line, we got two seats and I was able to continue on my pastoral visit itinerary. But I digress…
The service began with three hymns, a prayer, and 70 minutes of special music. Yes 70 minutes. This issue should have been corrected before, but it obviously hasn’t been. Each congregation, and there are now seven, has its own chorale, sometimes two. And everyone wants to participate, it wouldn’t be fair to only let one or two, sing and not others. So everyone sang. I made a note to talk about this in the leadership worship tomorrow. The offering was given in a different way too, a large basket on the stand was placed before the lectern and as music was played people, whenever they felt moved, walked up and put their offering in the basket.
By the time this was all finished, I had 30 minutes of time to speak before the two hour service should end. I spoke on the meaning of the Feast of Unleavened Bread in the Old and New Testaments, and finished right on time. Then two more chorales came up and sang for 10 more minutes before the final hymn and the closing prayer. 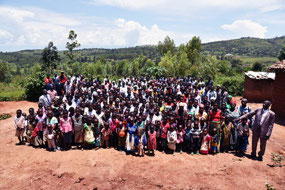 All those present
These members and potential members understand many truths of the Bible including the seventh day Sabbath and the annual festivals, but they’ve also brought in customs and habits from wherever they were before. One thing that is clearly not well enough understood is ministerial authority to organize the affairs of the Church. I think Nathan feels a bit overwhelmed sometimes, and needs some help. I determined I would need to hit this hard tomorrow.
I took some photos of the congregation, then we waved goodbye while they waited for a meal to be served, courtesy of brethren in the US. Nathan and his wife invited us to their house a stone’s throw away where we were offered a lunch of unleavened bread, roasted peanuts, bananas and a soft drink of our choice. This gave us the chance to talk with them and their children and watch a couple of grandchildren play. We talked about French and English, Kirundi and Kiswahili and they tried to teach us a few words of Kirundi. I didn’t try very hard, it’s better for me to learn words in Kiswahili which is much more widely spoken. 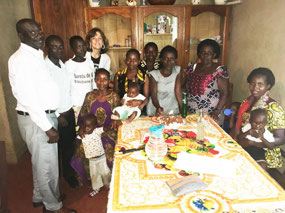 Nathan's family in their home
We spent about an hour with them before, regaining the vehicle and driving back to the surfaced road to retrace our path back to Bujumbura. We had a pleasant meal and talked over the events of the day. Marjolaine mentioned some very helpful suggestions concerning topics I’ll need to cover tomorrow.
We’re starting to get over our jet lag so we hope for an uninterrupted night.
Other Entries
-

Good morning/evening! Thanks as always for the insights to the brethren and their lives. Glad Marjolaine could be with you on this trip. You won't recognize Texas when you return - trees are nearly fully leaved out and brilliant green, the bluebonnets are in full bloom . . . and the weather is in its typical spring upheaval as storms regularly move through. Travel safely, give everyone you see our greetings, and we'll see you soon!

As a youth I attended a church that would sing lots of songs before the first message and the sermon. When I started attending WCG in '70 I was thrilled that the service format was so similar to what I was used to except the song service was so short. I adjusted so hopefully they can also.

It's always interesting to see your photos and get a glimpse of services there. With all the special music, the members must feel very happy and joyful. In time, the balance will move to more preaching of God's word. How helpful it must be to have Marjolaine's companionship, understanding, and good ideas from her perspective.

Once again we want to thank you so much for the dedicated travel to see our brethren. We love the pictures as we mentioned at a prior time and to read your blog. It helps us to feel closer to the brethren and the area. We are praying for your safe travels and return to the US.