-
Today was a finish up and travel day. Nathan said he would come to our hotel at 3:00 so we could wrap up accounting and discuss the doléances we had received.  Marjolaine and I slept it a little and I tried to get caught up on some office work. For lunch, we walked over from our hotel, along the shore of the lake, to one of the local hotspots for expats named the Bora Bora Beach Club.
We arrived after noon, but almost all we saw were people sleeping on cushions here and there. I assumed they were staff crashing from a very late (or early night of partying). This is a lovely location, the place itself looks better at night when blemishes and the need for repainting can’t be seen. We had the place to ourselves and had a quick, light lunch. They had techno-rap blaring when we arrived, but switched to the Gypsy Kings for us, which we much preferred.  We enjoyed our last looks at the lake, a truly beautiful site and then walked back to our hotel. 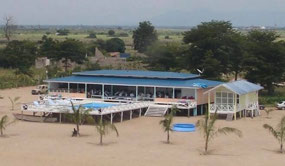 Bora Bora Beach Club
description
3:00 came and went¸ time ticked by to 4:00 pm, which is when we needed to head to the airport. I was about to make arrangements myself for a taxi when Nathan arrived. Mélance had been late showing up. Sadly we didn’t have time to discuss needs, I just took care of accounting for this trip, and then we loaded up and drove the short distance to the airport. We checked in and went through the security rigmarole then settled in for our wait until boarding time.
A bit before 6:00 pm, as the sun was setting, we walked out across the apron to the Kenya Airways plane. The flight to Kigali was a short one, less than 30 minutes. We landed in the dark and under a steady rain, not a good portent for traveling in the bush here over the next days.
We caught a taxi to the hotel, not my usual one this time. On special occasions, like having my wife with me, I check online hotel sites and look for special deals. This trip, the Hotel Des Mille Collines had a special rate the same as my usual hotel Chez Lando. The Milles Collines is the first hotel where I stayed when I came to Rwanda, because it was the only hotel still functioning in Kigali after the genocide. I used it for several years before acceptable and less expensive hotels came on line. I was happy we could stay here, Marjolaine never has, though we’ve eaten here together. 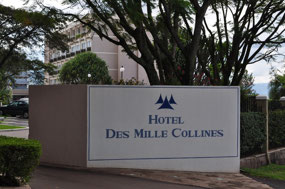 The Milles Collines
The reason the Mille Collines was not destroyed with the others was because of Paul Rusesabagina, who took over hotel management when the European manager left due to the violence in 1994. Rusesabagina used the hotel’s voluminous liquor stores and wine cellar to buy protection for the hotel and for almost 1300 Tutsis that he hid in the hotel during the three-month genocide. None of them were killed or even injured. This is the hotel portrayed in the movie Hotel Rwanda, which if you haven’t seen it, is worth a look. If these walls could talk they would have incredible stories. A different hotel was used as the set for the film.
I remember on my first visit to Rwanda, registering with the US embassy downtown as a safety precaution, because there were still terror attacks, and walking through the lobby of the nearby Hotel Diplomat, the second best hotel in town at the time. It was a bleak, charred waste. Even two years after the genocide, when I first came the wounds of the nation were still open and bleeding.
The desk staff upgraded us to a room with a city view, as we checked in, the views are really lovely, and they change through the day with the light conditions.
Now we’ll settle in for the night and prepare for the work to do here.
Other Entries
-

It has been so nice reading about your travels. What a busy itinerary you have. Nice you and your lovely wife are so adaptable. We had a light snowfall last night. I think everyone is ready for spring to come (and stay). Stay safe- prayers continue!

Glad you all enjoyed a nice venue and peaceful conditions. We pray that the rest of your trip will be profitable and encouraging.