-
Yesterday morning, we slept in as long as we could, because we knew the 48 hour day ahead would be very long. One of those times when two days merge with no real dividing line of sleep in between.
We had a personal day of rest on this Sabbath, while we allowed the three different congregations of various sizes have their service without having to travel mud roads in the rain.
Toward evening Mr. Mundeli arrived to take care of our last bits of paperwork and planning to do. Concluding that we said goodbye for about two months and he left.
Marjolaine and I had dinner at the hotel, then, about 11:00 pm we started out toward the airport in a taxi. The long process began. Before being allowed to enter the airport, we had to stop in a security area, pull out our suitcases and carryon bags, and let a bomb sniffer dog walk around them and us. A guard with a round mirror on a pole, went around the taxi to check underneath for bombs. We were then allowed to mount up again and continue into the airport zone.
At the terminal I paid the driver and we wheeled our bags up the hill to the door where our tickets were checked, and we sent through a second complete security check: shoes and belts off, laptops and liquids and other electronics out, and the walk through the metal detectors. Then we lined up at a counter to check-in which went pretty quickly. We were told however that while our bags could be checked through to Mauritius we would have to check-in and get the boarding passes for the flight from Madagascar to Mauritius in Antananarivo. I knew that would likely be a wrinkle.
Then we went upstairs and went to the business class lounge used by all airlines. We were flying Kenya Airways so I should have been able to have a guest, but I was informed that since this wasn’t actually a Kenya lounge, I’d have to pay for a guest. We decided it wasn’t worth the 30 dollars. I went in for a few minutes, stuffed a few bags of chips in my carryon and went back out to my better half.
We waited until a little before 01:00 and then walked out to the Kenya Airways Embraer. We took off on time. We didn’t sleep during the half-hour flight to Bujumbura, nor the 45 minute layover, and dozed a bit during the 90 minute flight to Nairobi, where we arrived as the sun was brightening the horizon. I always have a spring in my step when I deplane in Nairobi, so many good memories from Kenya (some bad ones too, but mostly good). 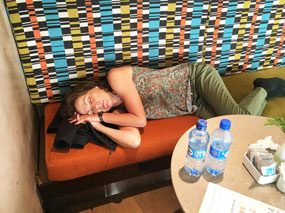 Dozing beauty
We walked the maze of halls to transit security check, number four for the trip, and then made our way to the Kenya Airways lounge. We had six hours to wait, and if there had been a hotel in the airport, I would have paid to sleep in a room for a few hours, but there was none. We tried sleeping on the benches in the lounge as best we could, but neither of us slept much.
When the time came we boarded the Kenya flight to Antananarivo, the capital of Madagascar, a three hour flight during which we did sleep an hour or so. On landing in Tana as it’s called locally we followed the transit signs to a dead end corridor where we waited half an hour until an immigration agent arrived. We were lead through a doorway into the departure area where we went through our fifth full security check. Our passports were not returned however. An attractive young immigration agent, explained that she would be getting our boarding passes for us. Would I please provide proof of our hotel reservation? I didn’t have a printed copy, but offered to pull the reservation up on my phone app if they had wifi. No wifi. I’ll pay for data roaming. No network for data. 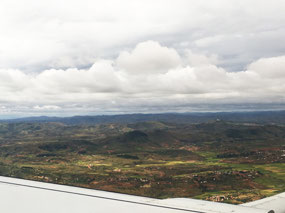 Landing in Madagascar
I power up my laptop and show her the e-mail confirmation. She tells me she needs to show the reservation to the man in charge. I don’t like handing her my open, unlocked laptop. But if I don’t, we won’t make our flight. And I use my own personal encryption for anything sensitive in my files. Off it goes. I still watch anxiously until she returns with it. Now she wants our flight itinerary. That I do have printed on paper and hand it over.
While she’s off getting our documents done, I watch a group of 12-15 Muslim men who have taken over the empty space in the middle of the departure lounge. They are bearded, dressed in white robes, all wearing caps and they have spread out prayer rugs. As they do their kneeling, bowing, rising and repeat, other passengers must walk the long way around to avoid disturbing them. They show no sign or being aware that they’re unaccommodating anyone.
The announcement is made that the Air Mauritius flight to Plaisance is boarding. Passengers line up and have their passes checked, then file out onto the apron. We have no documents.
Finally the young woman sprints up with our passports and boarding passes; we are allowed to head for the plane, a wide-bodied Airbus. It’s a 90 minute flight to Mauritius. Once we’ve reached cruising altitude, and the crew is in the back getting the meal ready, I notice the Muslim men have taken over the galley area in front of us and are laying out their prayer rugs again and taking turns bowing and praying toward Mecca. They have taken over the center of the plane and if they wanted to cause mischief with the doors, they could.
When they have nearly finished, the purser rushes by us murmuring, the French equivalent of “What in the world?!” She chews out the other flight attendants within earshot “you can’t let them do things like that!” She then walks in among the men and corrects them too. I hear her tell them firmly “You must never do that again on an airplane!” No indeed. I remembered flying on Qatar Airways about a year and half ago and seeing an announcement that people needed to remain in their seats while praying…. 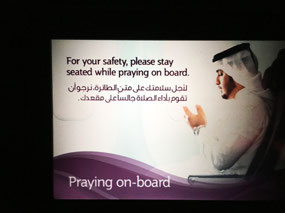 Yes, please....
We landed at 7:30 pm, then waited over an hour in line to be allowed entry into the country. We picked up our suitcases, rolled them out to the rental car area and picked up our little Nisan Micra, which, we were informed, was an upgrade to “full size.” It’s all a matter of perspective.  We drove to our hotel, checked in, grabbed a quick bite and will now crash, the word is not too strong. Tomorrow we will take things slowly.
Other Entries
-

I know this is a few days after the fact, but I hope you all were able to get some good rest. What an interesting experience on your plane. God speed the Kingdom when there’s clarity for all.

The detail you wrote about this trip (and others) help us to understand how challenging and stressful some situations are. I appreciate the sign you put on "Praying on-board" since I had no idea that this type of situation could take place in some airplanes. Wow! Continuing to pray for your protection, etc.

What to say about the customs of prayer, praying on board? So many changes, yet you all have met safely with the men and women there, accomplished your purposes, and given others the strength to continue on. We're thankful for your work and faithfulness.