A fast full week in Mauritius

-
The week has flown by. Originally we should have spent two days in Reunion and five days here, but I was informed after already buying the tickets that the members in Reunion would not receive us, so we came straight to Mauritius. I contacted the members here by phone and checked in with everyone. Because of health issues and jobs, we won’t see everyone until tomorrow. So we spent the rest of the week on a variety of projects. I worked most mornings and afternoons, and we would go out to local places for lunch. 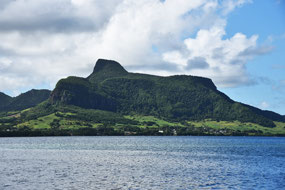 Lion mountain
I got caught up on office work, which of course never ends. There was personal correspondence to answer in French. There were plans to complete for my upcoming trip to the Congo, I’ll have less than a week at home before starting out again. There were arrangements to make for the June FOI project in Rwanda, yet another trip we’ll make. I did some research for articles I will write for church publications and wrote my weekly newsletter. 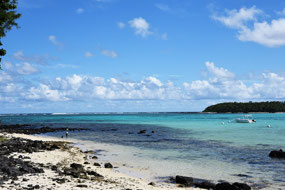 Blue Bay
We also did some research and exploration in preparation for the Feast of Tabernacles here in Mauritius, which is a most lovely place to spend the Feast with truly delightful brethren. We visited some previous Feast sites like Grand Baie and Flic en Flac, as well as another possibility we’ve studies over the years in Blue Bay near our hotel, beautiful places all. The hotel in Grand Baie looked quite run down, we wouldn’t want to use that one again, but the area is lovely. Flic en  Flac is still developing and flourishing, and will no doubt be the site we’ll use again this year.
We made a brief visit to Port Louis, the capital with its colorful central market, and to Grand Bassin, a Hindu holy place at a crater lake where Hindus perform ritual bathing and which has a 100 foot high statue of Shiva, the supreme Hindu god, and Durga a warrior goddess, nearly as tall. The center has changed quite a bit since we first visited in 2002. 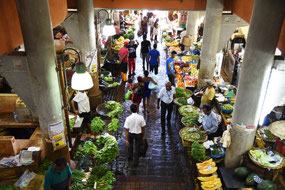 Port Louis market
We also took most of one day to visit the Casela Park, a nature-themed park with many exotic animals, with some of which one can interact. There are giant tortoises, lemurs, ostriches, monkeys, brilliantly colored macaws among other birds, antelope, hyenas, even a few white rhinos, but the strongest draw is the big cats. There are a couple of cheetahs, and a number of lions.
It is possible to interact with the young lions, up until about age 5 years when the males, especially, realize they have become stronger than the humans that raised them. It’s normal for lions to fight to establish dominance, and that wouldn’t turn out well for the handlers. But during the first years of life, even when they look fully grown or close to it, they can be managed with care and patted and caressed. One can even grab the lion by the tail and hang on to it while walking.
This project began in South Africa some years ago, I heard about it as we were planning a youth camp there in the early 2000s. It was set in motion by people who love lions and want other people to share that love, by eliciting respect rather than fear toward the animals. 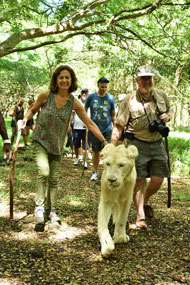 The King of the Jungle, with a lion
I was a bit skeptical about taking a walk with lions, but it turned out to be well worth the time and money. We spent about an hour with a one year old male, a striking white lion, and a three year old female. We each had the chance to walk alongside them, by their rear legs and thump on their sides and backs, and rub their bellies. Lions prefer to be patted firmly rather than petted lightly, they are strong animals and while they’re playful at times they’re strong and pretty rough (by our standards) with each other. We were to be careful but not timid. Being careful meant, carrying a big stick as a symbol of authority, not turning our backs on the beasts, not crouching down, and not getting in front of them. They instinctively practice ambushing each other as if hunting, and we would not stand up well to such play. 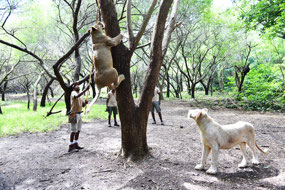 Here kitty kitty
The handlers would put pieces of meat on long poles and place the pieces up in the forks of trees so the cats would get their exercise climbing, which they did with evident strength. They are truly powerful animals. It’s a good things humans are smart. On the other hand…. 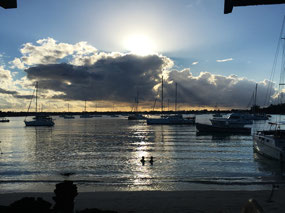 Grand Baie
I highly recommend Mauritius as a festival destination. It has an excellent tourist infrastructure, is not expensive, the people are friendly and welcoming, and our church brethren a delight to know.  Tomorrow we’ll have a day of rest with the members here, hopefully see some again Sunday morning and then in the evening start the long trip home.
Other Entries
-

Clever King of the Jungle caption!

Gorgeous photos! What a thrill to walk beside a lion, to watch lions spring into the tree for food. We hope the remainder of you visit is refreshing and productive.

What experiences! You probably don't share many of the negatives,but how many people get to see all you've seen in a lifetime? Be safe there and return home safely!

Happy to see that you were able to do the walk with the lions encounter. We certainly loved being able to have the same experience when we were at the Feast in Mauritius. I makes you long for the day when walking with lions will be the norm instead of the exception.