A day of rest in Paris

-
This morning we awoke having slept pretty well, and longer than usual. I had a good breakfast, since we wouldn’t be having lunch. At 1:00 Marjolaine and I left the hotel and started the pleasant 20 minute stroll to the hotel where the meeting hall is located. The sky was sunny and blue, the temperatures pleasantly cool.
Arriving at the hotel, we descended to the basement meeting hall and reset the chairs and tables according to our needs. Just before 2:00 pm, the little group started arriving. We were eight finally for the service.
It was a little like my father described his early years in the ministry, when most members were very new. I led hymns (accompanies by recorded music) gave the opening prayer, the announcements, the sermon, led the final hymn and gave the closing prayer. 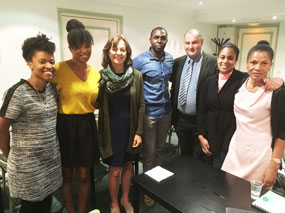 After the service
Then we began talking. The young ladies in the group had brought cake and fruit juice, which we enjoyed as we talked. We talked about world events, our recent travels, the challenges facing Africa, the challenges facing Europe, the challenges of being a Christian in societies increasingly hostile to Christianity, and many other topics. The time flew. I glanced at my watch thinking it was perhaps 4:00 pm only to see it was 6:00 pm and time for us to free the meeting room. We shook hands and said goodbye, happy that we would be able to meet again tomorrow.
We walked back to our hotel, and changed clothes. Then we headed back out for dinner. Today is our 33rd wedding anniversary, so I invited my lovely wife to a little bistro I know well near the entrance to the cemetery, just around the corner from the Moulin Rouge. It’s on a lovely tree-lined cul-de-sac, the food is excellent, the staff very friendly and the prices reasonable. Marjolaine ordered sole, while I ordered breast of duck, a favorite French dish of mine. 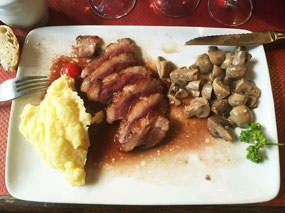 Breast of duck
We took our time over dinner, rehearsing blessings we’ve had in our life together, especially family travel, which is something we all enjoy. We’ve had some difficult trips over the years with illness and infections, missed flights, filthy bathrooms, bad food and unpleasant lodgings, but also wonderful trips with beautiful vistas, thrilling experiences and memories that bond us.
We remembered one morning, before our daughters were born, watching the sunrise over Cairo as we sat completely alone on the great pyramid of Giza (don’t ask how that was arranged…). And returning to the pyramids years later with our young daughters, using free air tickets we were awarded for giving up our seats on an overbooked flight back from the Feast of Tabernacles in France.
We remembered lying soaked in sweat in an un-air-conditioned bedroom in Ghana as we wondered if the ceiling fan would burst the lightbulb that wobbled dangerously close over it, giving us what we still laughingly remember as our Ghanaian disco lighting.
We remembered a pastoral trip in Cameroon when Marjolaine woke with a gravelly eye swollen shut from infection, and me going out to buy an eye salve she was thankful I knew, because I had previously used it myself.
We remembered a large rat in an outhouse in West Africa, but I won’t go into details.
We remembered the amazement, as a family, when we dove the USS President Coolidge in Vanuatu, swimming through the wreck of a luxury liner turned troop ship during WW2. Our elder daughter ran out of air and had to buddy breathe on another tank on the ascent – which she did without incident. It was a bit tense…. 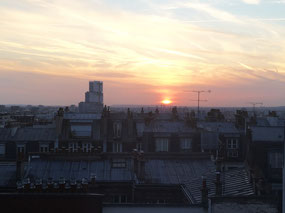 Sunset over the rooftops of Paris
We’ve had adventures in our lives, for which we are thankful. Adventures test and sometimes thrill. But the English word adventure comes from the old French aventure, which originally meant mischance or accident. It’s not really an adventure if you don’t suffer.
But we didn’t suffer tonight. It was all joy and thankfulness. And tomorrow will be another good day.
Other Entries
-

Thanks for sharing some of your travel memories. The rat, the buddy breathing in Vanuatu...kind of scary, but the view from the pyramid of Giza and the return trip later with your daughters--just wonderful.

Happy Anniversary and thanks for taking the time to write and post your blogs as we enjoy tagging along.

Happy Anniversary! Appreciated hearing some of the highlights (and also a few low lights) during your 33 years of a wonderful marriage.

Happy anniversary to you! We pray the rest of you trip will go smoothly.