Transiting through Africa to reach Asia

-
Yesterday morning we slept in as much as we could, then had a discussion about what to do with the few hours we had in Nairobi. We finally decided not to go out to visit anything. We’ve been in Nairobi so many times over the years there wasn’t anything we urgently wanted to see. And we were close to the airport, so we asked for a late checkout and I worked and Marjolaine read through the morning. At 2:00 pm we checked out, put our luggage in storage and ate a late lunch.
At 4:00 pm we caught a shuttle to the terminal and went through the initial security check required to enter the terminal. It’s as detailed and the one we would have to go through later before flight. We paid again to have our suitcases wrapped in plastic, then checked in on Ethiopian Airways for the flights to Addis Ababa and Delhi, India. After immigration we spent two hours in the Simba (lion in Kiswahili) lounge. In the old side of the airport, where we were, one doesn’t go through the security check until entering the departure gate lounge, of which there are 15 or so. So there are 15 different security points, not efficient for the airport, but the airport was designed long before terror was a safety issue.
It was raining heavily by the time we were to board. This is not the first time in the last 20 years that his has happened to me boarding a flight in Nairobi. In the old side of the airport, one walks out on the apron to the plane. Marjolaine and I happened to be among the first in line, so we could hurry through the rain down the stairs from the terminal and up the boarding stairs and get right on board. As more passengers boarded though, and necessarily took a bit of time to stow their carryons, there was a back-up outside the plane under the rain. Passengers who boarded toward the end of the process were well and truly soaked, and not in the happiest of moods. On the aisle, I was fairly damp from the water running off soaked passengers walking past me.
The plane departed at 7:15 pm for the 90 minute flight to Addis Ababa, an airport new to Marjolaine. We had a walk around so she could see the shops and duty free nooks. There is a area where one can experience the Ethiopian coffee ritual, whereby a woman in traditional garb roasts raw beans before grinding them with a mortar and pestle and then brewing the black liquid. Coffee originated in Ethiopia, so there is a long history of this ceremony of preparing it. We decided not to indulge at this time since it would keep us from sleeping on the upcoming flight, to Delhi. 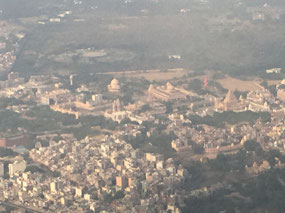 Final approach into Delhi
This second flight was 5 ½ hours long, not long enough to sleep very much; we calculated we slept about two hours, on the way to Delhi where we arrived at 08:30. We showed our e-visa papers to immigration and received our stamps, then picked up our luggage and prepaid a taxi to the hotel in the center of New Delhi. The plan for New Delhi was laid out by the British, next to congested old Delhi, when it was decided to move the British administrative capital from Calcutta to the west.
It took an hour to reach the hotel, through thick chaotic traffic composed of cars, trucks, busses, motorcycles, tuk-tuks (the Thai expression by which we call the three-wheel Chinese motor carts common in Asia), bicycles and daredevil pedestrians. 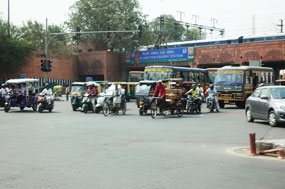 Traffic in Delhi
By the time we checked in a settled in it was time for lunch, after which, in our fatigue we decided to nap. We’d already had several nights on planes when we didn’t sleep enough, so we hoped to catch up at least a bit. Marjolaine slept several hours, I laid on the bed staring at the ceiling for an hour before giving up, and getting up to work in the afternoon.
Around 6:00 pm David Baker called our room, he had just arrived from east Asia, where he had overnighted after flying from the US.
We met in the bar for a cocktail. This was the very bar where Gandhi, Nehru, Jinnah, and the British Viceroy, among others, had met to discuss the partition of India, a fateful decision that led to the deaths of tens, more likely hundreds of thousands, a decision motivated, as is so much trouble today, by Muslim extremism. It was sobering to contemplate those historic discussions.
We moved to the restaurant where we enjoyed an Indian meal, a cuisine of which Marjolaine and I are very fond. It did nearly kill us once in Cambodia, a story for another time, but we don’t hold it against the Indian kitchen….
Now we’re hoping for a good night’s sleep. Tomorrow we plan to spend the day seeing the highlight of New and Old Delhi, and shooting some video for office use.
Other Entries
-

So glad you arrived safely and hope the touring and shooting video goes well tomorrow with good weather for it.

Happy that you have had a safe trip. Looking forward to following along. Thanks for the historical comments.

Thanks as always for the travelogue! Enjoy your trip and come back with a lot of footage!