A challenging start to another trip

-
My fall festival trip has begun. My wife and I just returned from our long European trip a week ago Friday, so I didn’t have too much time before leaving in this one, and the time was very full. I was to have left on this trip five days after our return but due to a delay which will be explained momentarily, it ended up being six. In those six days I spoke in East Texas, recorded a sermon in French for the Feast of Trumpets and another for the opening night of the Feast of Tabernacles, recorded an edition in In Accord in both English and French, including providing and sorting all the video and still used, and made a live presentation on sermon preparation to our pastors during a continuing education teleconference. That’s in addition to other pre-feast preparation like approving subsidies for French African sites. It was a busy six days…. As Manuel Iturra and I often joke in the office: No pressure!
The itinerary for this trip has also grown increasingly complicated as it's gone along. I approved an itinerary that would have me arriving in Mauritius, my first stop, on Friday morning, leaving Sunday morning for onward travel to Burundi. I bought the tickets. Then Kenya Airways cancelled almost everything for the Sunday. My travel agent and I reworked the itinerary, now I would have to leave Saturday (today) afternoon and travel all night to arrive in Bujumbura before the start of the Feast of Trumpets. Not good but at least we’d have Friday. That cost more, though we’ll get a partial refund for the previous, unused tickets
Then the courier service I used to obtain my visas, dropped the ball. They informed me the week before last that my two visas were in my passport and that it would be shipped last Friday, so I would have it Tuesday, after the long weekend. Then the agent forgot to give it to FedEx, for two days. So it wouldn’t arrive until Thursday morning. My travel agent and I had to work up another itinerary. She was able to convince Delta to waive most of the fees, but we still have to pay $250 more to make the changes, and now I would only arrive in Mauritius Saturday morning at 05:30 and would have to leave at 16:30. That’s my shortest visit ever in Mauritius…. The passport arrived as promised.
And then we drove through a terrific downpour on the way to DFW to start this trip, and the rain delayed the initial departure to the point I could not make my connection in Paris. The only way to arrive Saturday morning, meant a switch to American Airlines direct to London Heathrow connecting to an Air Mauritius flight to the island. Since there is no agreement between the two I would have to collect my bags at Heathrow, get them from Terminal 3 to Terminal 4 (that’s a 20 minute trip by shuttle or taxi), and check in for the next flight within four hours. No perks on either airline (and for frequent fliers those few perks are precious).
The flight to London left late (of course) so at LHR, I had only two hours to clear immigration, collect luggage, clear customs, take a taxi to Terminal 4 check in and clear emigration.  I had just enough time. That was one night on a plane.
The Air Mauritius flight left at 4:30 pm, and lasted 12 hours. It’s a long way from Europe to Mauritius. With the time zone change, I arrived in Mauritius at 08:00.  That’s night two on a plane.
By the time I cleared immigration (they found it strange that I flew all the way to Mauritius, so I could transit through to Johannesburg, only eight hours later) and picked up my rental car, it was 08:40. I drove on the wrong side of the road to the Prodigues’ house arriving at about 09:00. They were kind enough to let me use their shower, so I could freshen up and change after about 30 hours of travel in the same clothes. I know I wasn’t smelling like roses, and the change felt wonderful! 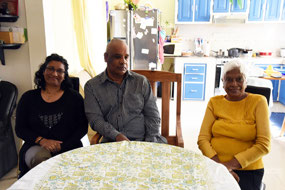 Members in Mauritius
There were four of us for an enhanced (includes hymns) Bible Study. I showed photos of some of our recent travel including in India where church members are facing mounting persecution from both Hindus and Muslims. Then we read and examined scriptures that concern persecution: that all Christians face it in some form, some manifestations we can expect based on biblical examples, and some points on what a proper Christian reaction would be.
We shared a nice meal that Saloni had prepared, curry and beef, and talked of current events and Feast of Tabernacles planning. Though my visit would be quite brief, they were very thankful and expressed this several times. Someone said these visits are regular proof that they’re not forgotten.
Finally about 2:00 pm, I said goodbye, wished them a fine festival season and asked them to send me some photos that I can use in our French calendar.
Driving quickly back to the airport, I dropped the car, and headed to departures where I learned my flight to Johannesburg will be delayed two hours. From there I should connect to an 11:00 pm flight to Addis Ababa in Ethiopia (that will be night three in a row on a plane – a new Meeker record), arriving early morning and from there a 12:10 pm flight to Bujumbura, where I should arrive early in the afternoon, hopefully still conscious and coherent. I will rest in the afternoon and prepare for the trip up country for the high day. 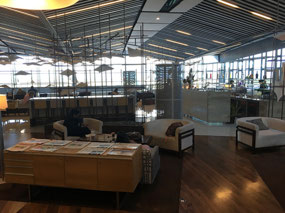 The lounge (my office) at the airport
I hope you did not find all the logistical talk too dull; it fills in details of the challenging nature of travel to/from and in Africa. Blessed are the flexible for they shall not be bent out of shape….
I have an extra suitcase with me, full of eyeglasses, toothbrushes and Church literature. An extra suitcase costs $100 to check, and it costs 35$ to buy a lounge pass, which would allow me to get some work done. When I found out South Africa was offering an upgrade to business class for under $250 including an extra suitcase and lounge access, it seemed a no brainer to me, so that will be a mercy during the 4-hour flight to Joburg, during which I suspect I will sleep.
Other Entries
-

Whew! I'm exhausted just reading about your trip so far! We did enjoy your visit to East Texas last Sabbath and are praying the rest of the trip goes more smoothly.

Words are hard to come by after reading all upheavals & unexpected turns. So thankful God is with you, before you, & behind you.

Challenging start? Yes, I would say this would qualify. Will certainly be praying for improved travel and for the brethren. May God watch over and bless all of you and may you and all the brethren have a protected, rejoicing, most magnificent feast.

This trip sounds like the most challenging you've had so far, and we will pray that it smooths out going forward. Your efforts to serve the brethren during the fall Holy Days are greatly appreciated, as you heard in Mauritius, "regular proof they are not forgotten."

I'm so sorry to hear all about your challenges and difficulties happening from the very start. That is pretty exhausting. Good thing your wife isn't with you at this time. I will pray more fervently for the rest of your trip to go smoothly. Thanks for caring for our French speaking brethren in far away countries! They are blessed to have a very dedicated pastor.

I am so very sorry to hear that you are facing such challenges on this trip. I Will pray that things go smoother from this time forward. Thank you for sharing with us and For all the efforts and sacrifices to visit and support the brethren in all areas of the world. We are blessed to have you.

Thank you for your dedication to our brethren around the world. We pray for your physical, spiritual, emotional, and mental strength as you let your light shine in your travels. We pray for the remainder of your trip to go well and safety in all areas of travel.

Oh, Joel! You've been in our prayers. We knew you had left from Dallas after your continuing education class (which was much appreciated, by the way). But we had no knowledge of all of these snags. As Dave Johnson recently reminded everyone in his In Accord, travel is exhausting and dangerous. May God smooth the road ahead for you, give you added energy and patience through His Holy Spirit, and keep you protected from all evils.

We love you dearly, Mr Meeker. Praying for safe and smoother travels.

Thank you Mr. Meeker for taking the time to share with us your grueling trip! May God bless you with abundant energy, patience and good things to accomplish his work!

Prayers for smoother travels and an uplifting Feast of Trumpets for all. Thank you for your service.

Safe travels Mr. Meeker. Thank you for all you do. I hope the rest of your trip is less challenging.

Thank you once again for keeping us posted about your travels and reminding us about our brethren around the world. We are praying for your safety and good health.

We will be praying for a much smoother rest of your travels. Very sorry to read it's been so challenging so far. Thank you for all you continually do for the brethren though it's frequently not easy. We very much enjoyed your humor in the In Accord this past week, btw. :) Hope you have a wonderful fall festival season.

Thank you for all your service to our brethren. Keeping you in prayer for safety and a spiritually rich Holy Day Season

Mr. Meeker thank you for your service to God's people in these far flung parts of the world. It is a tremendous uplift for them to have you there....even if it is just hours, in some cases. I'm not a COGWA member (in UCG) but I will be praying for your continued protection and blessings.