Heading to the Congo

-
This isn’t actually my first trip of the year, not even my first international trip of the year. We made a pastoral trip to the French Caribbean in January, but the Caribbean trips are fairly non-eventful, and I spend a lot of doing office work in our apartment. African trips however are almost always eventful, so here we go again.
I have started a week-long visit to the Democratic Republic of the Congo, which, after a recent presidential election, actually became at least slightly democratic. It was a long time coming. This will be the first peaceful transition of power in the country, since Joseph-Désiré Mobutu’s coup d’état in 1965. Concerns have been raised by opposition backers, and much of the West as well, that the newly declared president, Félix Tshisekedi, may not have actually won, and that the election was thrown his way on the understanding that he would protect the outgoing president from any legal problems arising from his past dictatorship. But it seems the West will accept half a loaf, and be content with a peaceful transition of power.
I was happy to see, watching events closely over the past weeks that Kinshasa has remained calm, so my trip could go forward. In recent years, trips to the DRC seems quite last-minute. Concerns over foreigners coming in to stir up political trouble have caused the government to carefully vet visa seekers. For several years now, I’ve been told not to buy a plane ticket until visa is in hand, because it’s not certain if or when I’ll receive one. It was only nine days ago that my visa arrived (it took a month), after which I had to hurriedly arrange transport. 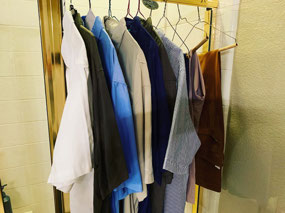 Soaking my clothing
The usual preparations were made: soak my clothes in permethrin, an insect repellent that will remain in clothing through six washings, prepare and pack a mini-pharmacy, pack used eyeglasses to distribute, choose books to read, charge all my cameras and screens, check electrical adapters; the usual.
The trip itself had interesting moments. The flight from Dallas to Detroit encountered the polar vortex on the way; temperatures were cold enough we were informed that they could not fill the water tanks on the plane, the liquid would freeze. So no coffee or tea was served. In Detroit it was around 0°F, we could tell it was very cold just using the jet bridge.
There was a layover of several hours in Paris before boarding the Airbus A330 bound for Kinshasa. African things started happening almost immediately. I watched the hefty fellow who would sit next to me, tip my carryon on its side in the overhead bin so he could put his in next to it. Then of course the bin wouldn’t close, so the flight attendant asked me to move my bag. OK, it was no use trying to explain. Africa does not respect my expectations of personal space, so sitting on an aisle I received my share of luggage hits as people crushed by.
We pulled away from the gate and stopped. The pilot announced a non-descript technical problem, we would have to move back to the gate. Then the tractor broke down, so we sat on the apron for two hours before pulling back in. We were two and a half hours late. I was actually hoping we’d make it to three hours, because then, by European law, Air France would have owed us some compensation, but it was not to be. I started reading my next book, Citizens of London, about Edward R. Murrow (the CBS correspondant), Averell Harriman (who ran Lend-Lease) and John Gilbert Winant (the American Ambassador) who stood with London and Winston Churchill during the Blitz and the rest of WW2. They played very important roles in Britain during its dark but finest hour.
The passengers were mostly Congolese, and during our wait they broke up into different conversations in the aisles, loud and animated. The group near me spoke a mixture of Lingala and French, with an occasional English expression thrown in. They were made more animated by the liter of Jack Daniel’s the fellow next to me pulled from his carry on. Several times during the two hours, he poured the sour mash into a smaller bottle he kept in his pocket and poured more into cups held out by his friends, before stashing the larger bottle, always out of sight of the flight attendants. I was concerned that the situation might get out of control, but it didn’t, just loud, animated, and somewhat agitated. I could only follow the French, so I only got about a quarter of the conversation but they were discussing passports, ID cards, driver’s licenses and associated requirements in different nations. It seemed part of the conversation was about what they would need to do to gain entry to the UK or the US.
The man across the aisle from me joined the conversation, which was mostly occurring in the opposite aisle. Space expectations again: he stood over me, leaning on the back of my seat, and gave his input, loud enough to be heard by everyone, a foot from my ears. I looked up hoping he’d take a hint. Finally I stood and suggested politely that he walk over to the other aisle to converse. He was surprised by my suggestion, why would he want to do that? I pulled out my earbuds, connected to my phone and played some Two Steps From Hell. I could then read in peace. 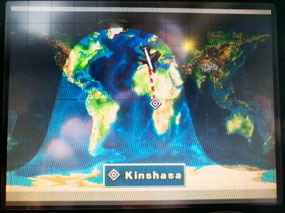 Starting the last leg
The flight lasted nearly eight hours; the animated conversations continued in clumps around the cabin through most of the flight. I slept about 90 minutes, and read halfway through my book. As we finally began our approach to Kinshasa, I overheard a humorous exchange. The flight attendant came down the aisle reminding us to move our seats to the upright position. The loud conversationalist hadn’t flown much I presume because he had trouble adjusting his seat. The flight attendant told him: “Just lean forward and push on the button, push on the button, the button, no not the button on your trousers, the button on the armrest….” 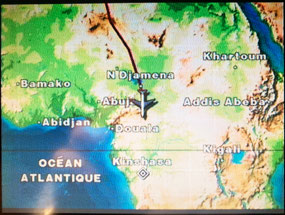 About to cross the equator
Another wide-body aircraft had arrived just before us, so there was a long line at immigration. When my turn came, the agent asked my profession. When I told him I was a pastor, his face brightened, he was happy to see me there. Then he asked “do have a little something for me?” I replied, “I’m sorry, I just arrived….”
At the health desk the agent asked to see my yellow fever card which, with overuse, has ripped into two pieces. She looked at me carefully to gauge my reaction: “that is very serious, very grave.” Would I be nervous, might there be a little money in it for her? I replied with a smile “that is not serious at all.” Nope.
It took 75 minutes for my suitcase to arrive. Then I got in the scanner line which was about 40 yards long. Two planeloads of passengers had to, one at a time, put all their luggage through one scanner. There is only one. As I got closer I noticed two baggage handlers with carts piled high with suitcases. They were nonchalantly paralleling the long line, with the obvious intent of merging in and shortening their wait. An agent spotted them and shouted at them to go to the back of the line.
Approaching the scanner, I noted six agents keeping an eye on everyone to make sure all the luggage went through the scanner. The screen next to it showed the moving scans of all the various belongings entering the country. I couldn’t help chuckling when it dawned on me that no one was watching the screen. The agents were making sure all our luggage when through, but no one was monitoring the scans….
As I left the terminal Justin, Victor and André were met with broad smiles and escorted me and the driver to the car. We caught up on our news as we drove into town. Everyone is well. The city is calm.
It was midnight when I checked in and said goodnight to my colleagues.  I will see them tomorrow to finalize our schedule for next week.
Other Entries
-

I'm glad you arrived safely and am praying for your safety and a successful trip!

So glad you keep so calm in all these situations. I am sure it is said to you many times but please take care. You will be in our prayers

Glad to see you arrived safely in spite of all that you have to deal with . Praying your trip is a positive one without any serious Incidents .

Thank you for sharing your experiences! I've often wondered why the flight attendants always do a demonstration of how to use a seatbelt, thinking that anyone who can't operate one should not be out in public unsupervised. But perhaps your story of the fellow passenger with the problem getting his seat back upright should make me rethink that assumption...

I always enjoy reading your adventures in travel. The pictures of brethren is really appreciated. Praying for a safe and productive trip.

We're happy to be following your travels. Great to hear that you had a safe flight, but what a commotion! It's also encouraging that the political situation has changed in a better direction, hopefully.

Happy Sabbath Happy to hear you arrived safely. We'll continue to pray for your safety.

Your descriptions of this travel day made me laugh out loud. Glad you made it safely and you are very much in our prayers for safety and blessings. Please give our greetings to the brethren, and they are in our prayers too.

Glad to know that you arrived safely.will be praying for a safe and successful trip.

Travel...without complications...is exhausting enough! Yet this! Your stamina (and self-control: invasion of personal space, carry-on manipulation, flight delay, and bribe requests) is evidence of God's Holy Spirit and answered prayer in action. We will keep our part in prayers going for your continued safety and all aspects of your service during this trip.

What a delight to read the 1st leg of your trip! Our prayers for your safe trip & success!