-
This morning, because of yesterday’s rain, things started later. It was nearly 10:00 by the time Justin arrived with a tiny yellow Toyota taxi. The steering wheels on these taxis are always on the right, because, I’m told, they arrive directly from Japan where they drive on the left. Every taxi I’ve been in so far has made an alarming sound of some sort, all different but all concerning. Still we arrived. Many streets were filled with water, sometimes it seemed as if we were driving through lakes. But we did arrive. 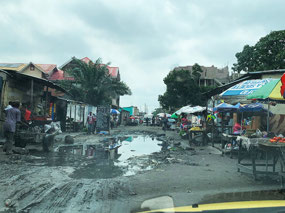 The road to the hall
Men trickled in through the seminar, all activities slow with a strong rain. Today the topic was: Our Example to the World and in the Church. Again I spoke about 90 minutes recording the session on my phone so I could leave it with them. We have not yet translated many of the documents into French, I give the lecture in French using English notes. We will eventually have the documents in French, but it will be a while. It’s a constant struggle for us in the French Department to translate all that needs to be translated. The Church produces so much in English it’s hard to read it all. Imagine trying to translate it with a team of three or four people who have other things to do as well!
After the seminar I took questions. One man wanted to know why we didn’t send men into the interior of the country to preach the gospel. He’s new to our church and still has traditional ideas uninformed by the Bible. I explained that the Church has to make decisions about how to preach the gospel with our limited means. We have decided that the Internet is the best use of the funds and efforts we can apply. “But people in the interior of the Congo don’t have access to the Internet” he objected. I said that there is no way we can reach every single person on earth. We make choices to reach as many as possible. I also reminded them of John 6:44, only God can draw people to Jesus and the truth. And I reminded them of the meaning of the second resurrection, this is not the only day of salvation. If people are not called by God now, they will be at some time in the future.
He didn’t want to let go: those poor people deserve a chance! I replied that God will make sure they have a chance. I also explained that we believe we have a responsibility to those who are drawn to the truth through our effort. We need to be able to take care of them. We need to have elders available to serve and teach them in a language they understand. If we don’t then we shouldn’t be preaching to them.
I also explained that we have a limited budget and that there is very little in the way of financial participation coming from the Congo. We're already subsidizing their church hall and almost all their functional expenses. This is not their fault, but it is reality. He was in effect asking other countries to subsidize, even more, their desire to preach to their countrymen at the expense of their own people. We’re certainly not against them sharing the gospel, but they need to be able to support the effort. I suggested that they pray that God would call some well-off Congolese to the truth, so that they could become financially self-sufficient, and then we can plan accordingly.
I’m not sure they were convinced, but at least they ran out of arguments. 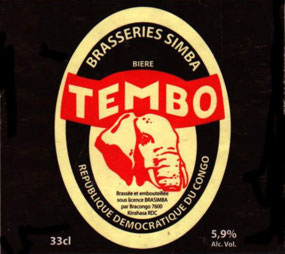 A favorite in the Congo
It was 2:00 by the time we finished. We took the taxi through waterlogged streets back to the hotel where I had a very late lunch of pizza. I took the few leftover pieces back to my room and ate them later for dinner, accompanied by a Tembo beer. Meaning “elephant, it was originally brewed in Lubumbashi by a Belgian, but it’s now also produced in Kinshasa. The Vienna-style amber lager is my favorite in the Congo. 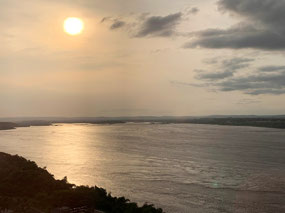 Another view of the river
Tomorrow we’ll cover another lesson if the rains allow it.
Other Entries
-

Thank you so much for allowing us to walk with you on your trip. We are praying for success and safety. You’re a very patient man. God bless you.

the water-filled street photo makes clear why it must be hard to get everyone there on time. Interesting discussion about the missionary approach to preaching the gospel v. God's calling, also the priorities of what to translate into French.

What a reminder of how blessed we are, not only physically but in the understanding of the ways God works. Interesting the "little ones" God is calling in this part of the world. Tks for all your service!