Marriage problems (not mine)

-
Tuesday morning passed without Justin arriving at the hotel. I suspected it was Monday’s heavy rain that was the culprit, and this was correct. He arrived after 1:00 pm, to say that the rain had so disrupted the city, water flooding people’s homes and so on, that it would not be possible to meet.
Since I had scheduled Wednesday as an office work day and had an appointment at the hotel (which was cancelled at the last minute), we would not be able to meet that day either, so our next meeting was to be Thursday morning.  I used the rest of Tuesday and Wednesday for office work, so as not to get too far behind.
Two rather unusual things happened. One was an elevator ride down to the lobby in the company of a local woman and her three year-old son. She had given the little boy of wad of twenty dollar bills to play with. I could sense her watching my face as I looked down at the boy with the greenbacks. Of course we can’t read the hearts of others, but it seemed likely this was conspicuous demonstration of wealth. Some families of four would love to have twenty dollars for a week. They were so well off, they could afford to…. I made sure not to look back at her in case she was hoping for a reaction.
The other unusual event, lighthearted this one, occurred Wednesday was that when I ordered 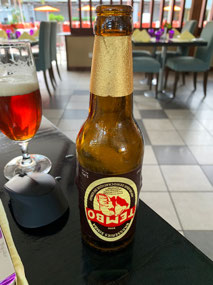 What's wrong with this picture?
a Tembo with dinner, I noticed someone in the brewery had apparently been sampling the wares.
Today, Thursday, were able to meet once again. The topic for the day was Leadership Though Our Marriage and Family Life. Much of Africa is from the Old Testament world. Village elders are called upon to give binding judgments, patriarchs sire large families; their power almost absolute. Polygamy abounds, as does prostitution. Most Africans live under despotic dictators as kind and gentle as Nebuchadnezzar. Tens of thousands still suffer from leprosy. Maimed people lie in the streets begging for alms. Blind adults are hand-led by children, among traffic stopped at intersections, also asking alms. They still even hiss to call people: “I will hiss for them, and gather them; for I have redeemed them: and they shall increase as they have increased” Zechariah 10:8). (Incidentally, I’ve become quite a good hisser myself, it gets a waiter’s attention immediately, and if God hisses, it’s ok…). There’s probably a sermon in there somewhere.
I say that by way of introduction to explain why our mature Christian model of marriage is often met initially with skepticism, and sometimes not only initially. They have more of an Abraham-and-Sarah marriage model in mind. The first time my wife and I presented a marriage seminar in Africa, it was in Ghana, I mentioned that a husband’s best friend should be his wife. The ladies in the room brightened visibly, the men just blinked blankly. That’s just not the way things are done. What kind of man are you if your best friend is a woman? Wives are kept in line, with brute force when necessary. Some ladies explained to us that some women won’t respect their husbands if they don’t rule with a rod of iron. One wife told us her husband does treat her like his best friend, but only in private. To maintain his respect as a man, he has to treat his wife like other men treat theirs when in public.
We went over the basic principles in the Bible about the role of the husband and the wife in a marriage. Among other things I explained that in the Church of God, a man who strikes his wife is suspended from attendance. Then I answered skeptical questions again, as I have many times before. “What if your wife just won’t see things like you do?” “What if you can’t convince her with just words?” “Is it ok just to twist her ears a little?” If this were a problem in their families, I suggested a family Bible Study where they read the passages together and discuss what they mean and how they should be applied. I don’t know how much this will change things, probably not much in the immediate. But I do know of a number of marriages in French Africa where they’ve gotten the mix right, they’re truly exemplary. It is possible even in these societal contexts. God’s way is always possible, if not always easy. 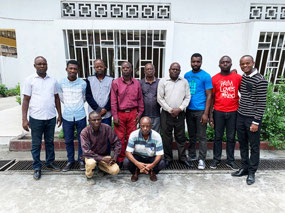 Leadership seminar attendees
A few “what if” questions were asked, some I could answer and some were so intricate and hypothetical all I could do was fall back on husbands love your wives, wives submit to your husbands, pray for wisdom and apply the Golden Rule.
We spent about four hours total together. I finally said goodbye until tomorrow when we’ll have one more seminar. I took a group photo of the participants, all but one with a weighty look of gravitas on their faces. 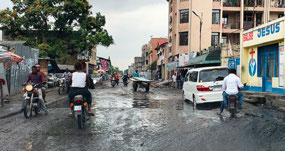 The streets of Kinshasa
The streets were still choked with traffic, lurching along around and through potholes, some filled with foul dark gray water. Potholes filled with water are tricky because one can’t see how deep they are or where rocks are, and so on. So one must often go slowly, although many taxi drivers know the potholes like the backs of their hands, they know what path to choose. 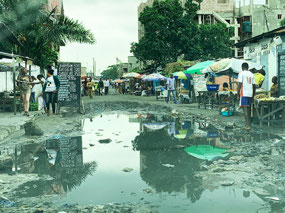 A shower anyone?
Today’s taxi had the passenger side window stuck halfway up (I’m a glass-full kind of guy), so when driving through pools of water I flinched a few times as vehicles going the other way sprayed the odiferous sewage in the air. I was thankful to escape each time.
As usual stepping into the air conditioning of the hotel brought me to back to a different world.
Another day in Kinshasa….
Other Entries
-

Tks for your blogs. Very thought provoking learning the social and living conditions our brethren deal with every day.

Thanks for the very informative blog! I'm glad you escape the odiferous sewage. Continuing to pray for your health and safety.

In teaching the Christian family model you must find it hard to challenge the old ways of thinking about rulership and respect. It's encouraging that you know many African families that have gotten the correct mix of respect, friendship, and cooperation. Just reading about the roads and the conditions after it rains, makes for sadness. Great title for your blog. Hmm...I hope you didn't pay for that sampled beer.

All the best Mr Meeker! Photo's depicts what an African city looks like, or parts of it, and the challenges which are being faced, so vividly - one really feels for the people and makes one looking forward to God's Kingdom so much. Appreciated your comment on the photo of the men.... (one-and-a-half smile)

Wow, what an interesting discussion about husband/wife relationships. We wish you all a wonderful Sabbath, and for you a safe conclusion to this trip!

Thanks for your blogs. Enjoy keeping up with you and your travels.