-
Today was a cloudy, humid day, less hot than a sunny day would be, but just as capable of soaking one in sweat.  The streets were mostly, but not entirely, clear of water, so the going was a little less slow. We drove over to the church hall for one last seminar. Along the way we saw the usual makeshift shops, where amateur merchants hawk their wares wherever they can. Some wander the streets carrying their merchandise. Others lay it out on the sidewalk. Still others set up jury-rigged stalls wherever they can. Everyone is hustling to make enough money to have dinner. 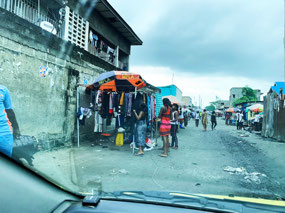 Makeshift shop stalls
The topic for today was Mastering the Tools of Christian Growth, which covers the importance of prayer, Bible study, biblical meditation, and fasting.
This was less controversial that the way the family should work, but there were still questions, mostly about meditation and fasting. I underscored the difference between what is called transcendental meditation, emptying the mind, with biblical meditation which is to concentrate on a spiritual topic and see concrete applications in one’s life.
A question was asked about whether a Christian can practice yoga. I explained some of yoga involved physical techniques for stretching and relaxation, which presents no problem, but that going into the “spiritual” aspects of yoga would take one into the realm of Hindu beliefs, which we would avoid.
There were also questions about fasting. Many people in the Congo are forced to fast against their will by poverty. I’m sure it seemed strange to some that one would voluntarily abstain from eating when it sometimes happens involuntarily. Did fasting mean to not eat only? For how long? And so on.
There were other unrelated questions too as their always are. One man asked if we would present them a certificate of completion when all the lessons were finished. It seems a simple enough question but I’ll have to think it over. Something as simple as a certificate of completion could be used to imply more than it actually would, such things happen often here. For the time being I replied that they were only at lesson seen, so completion was quite a way off into the future.
Around 2:00 we said goodbye until tomorrow, and I rattled and rolled back to the hotel where I worked in the afternoon and prepared for tomorrow, which will be a very full and varied day.
Other Entries
-

Interesting that something as simple as a certificate of completion could present problems. That knowledge is some of what your years of experience have gained you. What hard decisions. How many-layered is wisdom! Someday there will be no cultural, economic, governmental barriers to the truth! Thanks for the photo reminder.

Thanks for the update. Living a life of poverty is surely difficult for all there will pray God gives them understanding