-
I have started my first African trip of 2020, and my first with my new colleague Lee Page. With the approval of our administration and the Board of Directors, we offered to hire Lee, an elder in the Church, to serve in the French-African region. He and I will travel together for a year or thereabouts, so that I can formally present him to the leaders and members here, and try to pass on what I can of what I've learned in the last nearly 25 years that I've been working on this continent. I say formally present because Lee and his wife Robyn have attended the Feast of Tabernacles in most of our French African sites over the course of the past few years. We are very happy to have Lee and Robyn on board.
We saved about $4000 by taking an unusual routing to get here in Abidjan. Lee flew from Orlando, and I from Dallas, to Los Angeles, three or four hours in the wrong direction for us, but I felt the savings was worth it. These are the least expensive tickets I’ve ever bought to multiple destinations in Africa. So at 7:00 Thursday morning I flew to LAX where I met Lee who had arrived just after me. 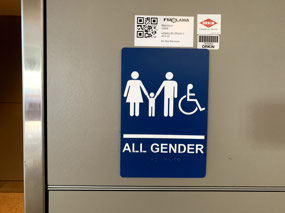 On the Left Coast....
We had a four-hour layover which we spent in the Korean Airways lounge (I have access because of my status with Delta). We ate and did a little work on our laptops. Walking by the toilets I did a double take. Life used to be simpler, and based on provable science.
The flight to Paris was 10 hours long; we arrived Friday morning about 08:00, (01:00 in Dallas)  which meant, because of time differences, almost the whole flight was during hours I don’t usually sleep, so I didn’t.
We then had a layover of seven hours, which we spent in the Air France lounge, before our six-hour flight to Abidjan where we arrived finally at eight pm. I slept a few hours on the last flight. 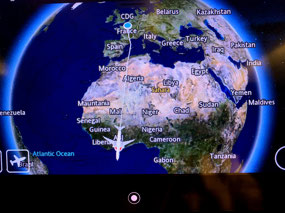 Almost there...
On arrival, it took almost an hour to get our visas, even though we had been pre-approved through their online system. There were only three men working to process 50 or more passengers from Europe and the US and it took about five minutes per person.
As we were leaving the arrival area with our luggage we had to put the bags through an x-ray machine. The agent spotted the eyeglasses that filled a small checked suitcase and called me over. “You have eye glasses?” she asked in French. I said yes, that I was a pastor, that they were used and of no commercial value and that I distributed them to poor people. She checked with her crew chief, who said I could pass. Great start, no hassle!
The hotel shuttle wasn’t going to leave for an hour, so we took a taxi to the Ibis-Plateau, my usual hotel in Abidjan. Sadly it seems to be going downhill in some ways, my room smelled a bit of mold, a bad sign in the tropics. I may have to look for another if they don’t do some maintenance.
After checking in and dropping our luggage, we came down to eat a salad. Lee had a beer and I enjoyed a glass of wine.
I’m dead tired now, so I’m sure I’ll sleep tonight.
Other Entries
-

We will be praying for open doors, safe travels, and blessings along the way. Thanks for sharing your journey with us.

So happy you have a new traveling companion for the next year. It should be interesting to view your far-flung pastorate from first-time eyes. May your travels yield blessings and much fruit.

Glad you have arrived to Côte d'Ivoire. Praying for both of you: safety, etc.

So happy to be able to travel along with you via your blog. Glad you have a companion to share the experience with, and to train. Will be praying for your safety and for a successful trip.

We're happy to read that you and Lee will travel together. We will pray for your safety and look forward to your comments.

Thank you Mr. Meeker! Glad to hear that you'll have a travelling companion for a year. Our prayers will be for your safety and a successful trip!

Traveling with you in Spirit and Prayer.