Adventures in the Bush

-
We had asked Paul to come to the hotel with the vehicle this morning at 08:00. He arrived at 7:30 as I was having breakfast. This is quite a long string of early arrivals. I’m trying to figure out if they mean anything.
I paid for our hotel stay and cleaned out my room. We were ready to go right at 08:00. We loaded our gear into the Mitsubishi Pajero under the care of a new driver named Losseny, and away we drove.
We drove to Treicheville, where the money-changers congregate. The driver didn’t know where to go, and Paul couldn’t remember either, so I got us momentarily lost before we found our way. A money-changer spotted us form the sidewalk and motioned us over. He offered 580 francs for a dollar. I negotiated up to 600. He led us to his “office” a closet-like room behind a tailor’s shop. We counted out the bills in both currencies, and shook hands at the end. Then we were ready to start out. I paid for about 75 dollars of diesel to fill the tank and drove to the four-lane toll road that leads to Yamoussoukro. 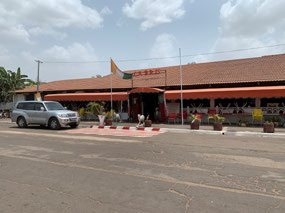 La Brise for lunch
About two hours later we arrived and stopped at La Brise, our usually restaurant stop in the capital. 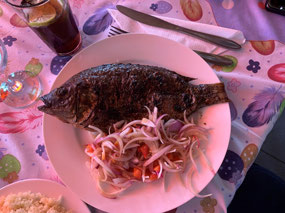 Fish
Lee and I had pizza, the Tias (Madame is along for the ride to visit her family near Man) had braised fish and our driver had chicken. What we didn't eat, though it was on the menu was Agouti, aka the Greater Cane Rat.... 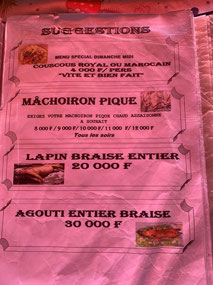 Last item on the menu: Greater Cane Rat
We finished by 12:30 and were back on the road. Then we had another adventure. Only about 15 miles from Yamoussoukro, the air-con worked less and less well, and unusual noises came from both under the hood and from one of the wheels. It got continually worse until the driver stopped to look. Something was seriously wrong with a wheel, we would have to stop at a garage to have it checked. We rolled slowly into Bouaflé and into the first garage we found.
Garage is a big word. It turned out to be a vacant lot with cars and parts scattered around the ground, and a tin-roofed, open sided construction equipped with some hard wood benches. We waited in the heat while the vehicle was checked. It took half an hour to get the news: the compressor belt for the air con was bad, and a ball bearing pack was bad on the rear driver-side. We would not be able to use the air con for the rest of the day, but they could fix the bearings and we could complete the trip if we didn’t mind the heat. Or we could wait while a new vehicle made the 3 hour trip from Abidjan. 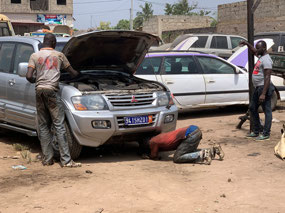 We have a Pajero down, we have a Pajero down
We could make the trip without air conditioning, so a mechanic went off to buy the necessary bearing pack. A while later the mechanic returned without having found the part needed. So we could not continue. Losseny called Kramoko who said he would send another driver immediately with another vehicle. It would take him 3-4 hours to arrive. 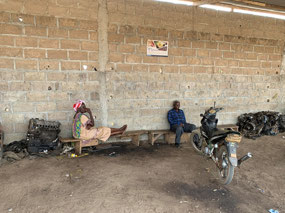 The "garage" waiting room
I suggested we try to find a place in Bouaflé that was air-conditioned, so we could sit and wait without massive perspiration. A passing taxi driver told us he knew a place, and dropped us at the very optimistically named Restaurant Paradis, which has one extremely anemic air conditioner in a large dark room. We sat at a table under a ceiling fan to drink lukewarm beverages. I misunderstood the mumbling server, and instead of getting a 1664 (a nice French beer from Alsace) I got a Bock 65, which is the cheapest and worst beer in this country, possibly in several others as well. I got caught up on my journal to that point.
We waited in the restaurant until about 6:00 pm when Paul heard from the driver that he was leaving Yamoussoukro. We paid for our beverages (and an eight dollars fee for using their “air conditioned” room) and called the local taxi to come take us back to the broken vehicle. The needed part still hadn’t arrived, but there were three mechanics sitting on the ground around it.
Half an hour later the “new” Pajero arrived with a Kramoko, the younger brother of a driver we’ve used on this run several times before. I took photos of both fuel gauges, since I was leaving almost ¾ of a tank in one vehicle and only getting ¼ in the next. That’s 40 or 50 dollars’ worth. I’ll fight that battle when we pay for the rental.
We first had to refuel the vehicle to make the rest of the drive. By the time this was done, it was dusk and rapidly getting dark. This meant a long go because at night one has to slow down even more than usual because of the potholes. We served around, often through clouds of dust coming from unpaved sections, and sometimes because of construction having to stop to let oncoming traffic pass before we could. This went on for more than five hours.
We finally pulled in to Man about 12:30 am. We checked into the Hotel des Cascades, and finally got into our rooms after 1:00 am. Then I had to do some urgent work. Yesterday I received an e-mail from Rwanda, requesting two documents needed for our effort to be recognized as a Church by the State. I was able to prepare the documents, but I couldn’t send them because the Internet was down. It seems to be down all over the country: no data access, no working wifi. It’s just after 3:00 am now, and I’m finally going to bed. I’ll try to send the documents tomorrow mornings as early as possible.
Other Entries
-

What a frustrating day all around. As a reader I feel the tension just from following the account. Your patience with negotiating money, paying for the use of the air conditioned room, and waiting for transportation--must be a quality learned over so many years serving in with reality. We look forward to hearing that the paperwork is finished and the church in Rwanda is recognized by the state.

Though it seems somewhat evident that you are not greatly enjoying some of these quite stressful, and no-doubt draining, circumstances, it seems (as usual) that you do enjoy descriptively sharing them with us. And I suspect that provides you with at least a partial degree of recuperation. Thanks - you bring us laughter, though sympathy as well! :) Our prayers are with you! (And keep sharing! :) )