-
This morning we were back in Sébapleu (the 5th village from yesterday) before 9:00 for a session of baptismal counseling. About 15 people were present, 10 of whom were just starting their preparation. I took this whole session to show Lee how I handle such counselling in this context.
I started by addressing the first-time counselees. We distributed a Bible to each person who qualified. Then we read scriptures about how the world has been deceived since Adam and Eve’s sin in the Garden of Eden. Satan is called the “god of this world” who has blinded the minds of what Revelation calls “the whole world.” It is a privilege to have the veil removed from our eyes, so we can respond to God. 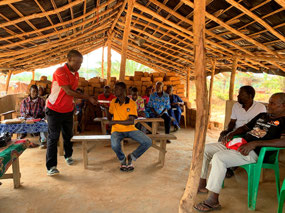 Distributing Bibles as we start the discussion
We discussed the meaning of baptism and the two main conditions to be fulfilled before baptism.  Finally I gave them a list of scriptures and booklet titles that they needed to read and study before our next meeting. This took about an hour. I dismissed that group so that we could continue with the five men who had already had the first session. We read through passages that explain baptism and the conditions to fulfill. We read Romans 6-8, and I explained the meaning of Paul’s exposition.
When Paul spoke of our need to obey the law of God in the spirit and not just in the letter, we turned to Matthew 5 to see the difference Jesus made between the the two. “You have heard it said… But I say to you…” Jesus explained the difference using three of the 10 commandments, I asked them to do, as homework, an analysis of the other 7 of the 10, to clearly understand the letter and the spirit. We will discuss this tomorrow.
We discussed repentance and the difference between the sorrow of the world and godly sorrow that leads to lasting repentance. Then I took questions for a quarter of an hour, mostly about the situation of a baptized man married to an unbelieving wife, which is the case for most of them. This session lasted about 90 minute. 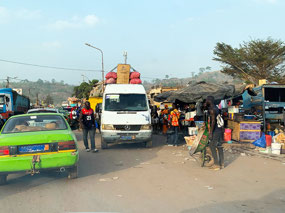 Arriving back in Man
I headed over to the vehicle so we could continue on to the three villages we had missed yesterday. But Séussié said he thought it wasn’t really necessary since we’re going to have our combined service on the Sabbath.
We arrived back at the hotel about 2:00 pm, I asked the men to come back at 6:00 pm so we could have dinner together. They left and Lee and I had a light lunch. In the afternoon I worked on my laptop, and had a refreshing facetime conversation with Marjolaine. At 6:00 Lee and I want to the restaurant, we waited until 6:45 and figured the men had been held up somehow, so we ordered. A few minutes after we ordered, right at 7:00 pm, the three men arrived. They had taken a nap, and overslept. Our plates of spaghetti arrived before they had even ordered. 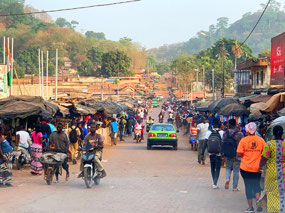 Through the market to our hotel
So I ended up sitting with them and talking while they ate. We talked about the situation, they asked for an evaluation of their work, which I gave both things that were going well, and a few things that could be improved. Lee excused himself early, he has a long presentation to make tomorrow. I stayed with the men until they finished around 9:00 pm, we walked together to the front door and I wished them a pleasant evening.
Other Entries
-

Thanks so much for your posts It’s clear to see one has to exercise patience to endure the many challenges that are put before you both each day ! Praying all will go more smoothly for you both!

Thank you for including the main points of counseling for baptism you discussed with the men. Being called out of blindness--what a great blindness worldwide. It must encourage you and Lee to bring good news, baptism, laying on of hands--knowing the people there will have God's spirit to help them. They will have more hope.