-
This morning, we were going to leave at 09:00 to make a day trip up to Kpalimé. Lee was working on a new Bible Study for tomorrow; we both the felt the topic that he covered in La Mé wouldn’t be quite as appropriate for the group here. He had worked on it Tuesday and Wednesday, but felt it needed more attention, so he decided to stay back and spend the day on it.
Guy called to say they were running late; they finally drove up around 10:00. We said goodbye to Lee and started out for Kpalimé about 100 km (60 miles) north of Lomé. We first used the bypass route that allows trucks to skirt Lomé as they head either west to Accra, east to Cotonou, or north to Burkina Faso, Niger or Mali. As we drove, we passed a little church hall, the construction of which I had overseen. Shortly after it was built, the government announced that it would have to be torn down to allow the new bypass to be built. The members were very sad and discouraged, they had put so much work in it. With what the government would pay as restitution, we would never have been able to rebuild a similar structure. I remember encouraging them that God could still intervene, I chose a day for all of us to pray and fast about this problem. Shortly after we all beseeched God to intervene, the government announced a slight change of path. Our little church hall was safe.
Sadly, shortly after that deliverance, most of the group decided to stay with the association that fired me and others, and told us to get out. We hear there is frustration in that little group now with the way things are being administered, that is as it stands now. Still I felt nostalgia for that little building where I had spent so much time. 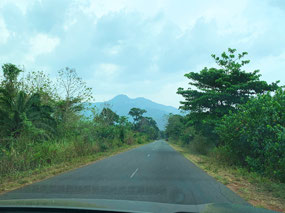 The Pic d'Agou
When were almost right on the border with Ghana, we turned north and drove through the dry savanna of Togo. The road is only moderately potholed so we made pretty good time. We made a first stop at the Pic d’Agou, the highest peak in Togo at just under 1000 meters high. The drive up and back was on a very narrow road that afforded impressive views here and there, though the air was so hazy that by the time we reached the top, we could scarcely make out any of the plains. 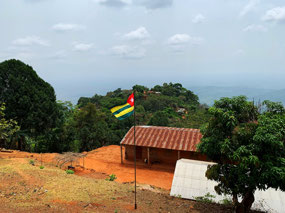 A school on the Pic d'Agou
At the very top are several communication relay towers that transmit radio and television channels for the whole country. Guy knew one of men there, so we received a brief guided tour around the grounds and even inside the server room. It was mentioned several times a this is a key installation for the modern communications of the whole nation. We tend to take things like this for grated in the west, I’ve seen similar control rooms for all kinds of technology, but there would be few like this in Togo. 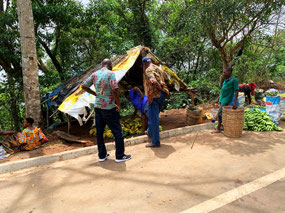 Yes, we have some bananas
On the way back down the mountain we stopped at a place where locals were selling fruit grown there. Guy bought some organically grown bananas which we sampled as we drove.
Back on the savanna we drove into Kpalimé, to Guy’s country house. He’s originally from here, and Africans keep a residence in their home village when they can. The village house can range from a simple mud brick structure to something quite nice. Guy’s house is still under construction but, but it already large enough to meet the current Feast of Tabernacles needs for the local congregation. So last year, they decided to use this as their site, and to lower the amount of subsidy that would be needed. The compound is still clearly a construction site, but the finished part of the house was as nice as many hotels in which I’ve stayed, with the exception that there is no air conditioning, but then, none of our members here have air conditioned homes, so it’s the norm. 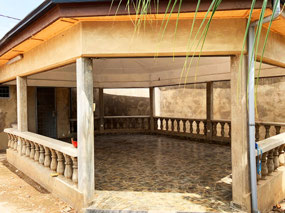 FOT meeting room
We sat inside and discussed how the Feast has been organized and what upcoming plans they have. It was all very positive. I wish we could be so organized everywhere in Africa. 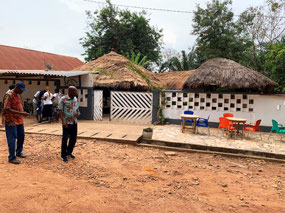 Lunch restaurant
We drove on to a restaurant, probably the best in Kpalimé, started Guy told me by a Swiss man who built up a thriving affair, before being swindled out of it by his Togolese business partner. Caveat venditor! I had a chicken brochette, my two companions ordered guinea fowl sauce with fufu, that white dumpling made of various boiled tubers such as cassava, yam, plantain and macabo, the mix depending on the country. I’ve never cared for fufu, and I know Africans who don’t like it either, but most do. It’s a common staple.
We told each other stories about interesting experiences we had in life. Guy mentioned how we was offered a used laptop computer for sale, which when he examined it, he found contained contact information of a man who appeared to be the previous owner. Suspicious, he called the number in Lomé and asked to speak to the man, he was told the man was dead. “What is his laptop doing in Kpalimé?” Guy asked. Shortly afterwards the police called him back. The wealthy businessman had been murdered. The police picked up the man who tried to sell the laptop, and were able to unravel the whole chain of crimes. The man had been murdered by a gang assembled by his own son, to cover up his financial malfeasance. What a world! And it was all blown because someone got greedy and decided to sell a laptop.
Since we were sharing crime stories, I told my graduate student story of the time I worked as a freelance interpreter for a joint US Justice Department – unnamed European agency investigation of a man suspected of laundering drug money in the US. My services were needed for a whole week. To spring me from my teaching responsibilities at the university, the US Attorney wrote a letter on Department of Justice letterhead to my department head stating that my services were needed for matter of national importance. At the end job, some of my fellow grad students at Washington University suspected I might be an undercover agent – the word "spy" was used, and two FBI agents actually took me aside and offered to help me enter the Bureau as a legate, a legal attaché acting as a liaison between the FBI and foreign investigative services. Since my family of four was just getting by on a grad student stipend at the time, it was tempting, but I wasn’t willing to carry a firearm. I have been known to carry a sword, yes, but not a gun. 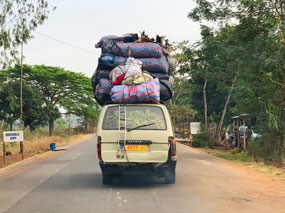 Can you say "center of gravity"?
We drove back to Lomé, seeing some of the usual, unusual sights of this region. Like this overloaded bush taxi, that would probably topple over if the driver took a turn too quickly.
I had finished lunch after 3:00 pm, so I’m not hungry for dinner. I’ll make it an early night.
Other Entries
-

Beautiful views from pic d'Agou, and also of the FOT room. What a blessing that Guy's house will serve the brethren there and that plans are in place for the Feast. Wow, the loaded car stuffed with bananas, all things tied down securely, I hope. Thanks for including the interesting stories. Good that Guy called the police about the used laptop, otherwise he might have been at the bad end of a murder scheme. Murder and money laundering in the same blog? It could be the makings of a travel thriller.