-
I’m back in Kinshasa, Democratic Republic of the Congo after a two-year seven-month COVID hiatus. I left Dallas, Tuesday afternoon, on the non-stop DFW to Paris, Air France flight. I’m going solo this time for family reasons, so I took an Uber to the airport. The small Air France lounge that used to be Terminal D is no more, a victim of COVID no doubt. So after checking in, I took the shuttle train to Terminal E where I could use the Delta Lounge, and have a free lunch. Then back to Terminal D.
While I was waiting in line, I observed an American woman with her Congolese friend (I noticed her passport) doing the drift into the front of the line. What I call the drift is where people slowly move in toward from the side toward the front of a line. They move slowly and obliquely, to avoid attracting attention, and end up standing next to the front of a line, but not in the line. Nothing to which to openly object so far.
Then after a while, they gradually drift over into the line, one shuffle at a time, often while looking a different direction, hoping no one notices. This is common in much of the world but hasn’t been in the US (at least where I’ve lived), where we’ve had a traditional sense of fairness and waiting one’s turn. I pointed out to the women that they were jumping the line and that we didn’t do that in the US.  They didn’t appreciate the attention and were visibly ill-at-ease, but brazened it out, claiming they had been there before and had to leave for a while, which didn’t add up to their behavior. No sense of shame or fair play. I didn’t take it any farther, but I was a little sad for my country. 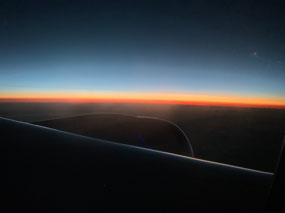 Sunrise over the North Atlantic
I slept about 4 hours on the overnight flight, arriving in Paris at 08:00. I went through security once again – one always does when transiting through Paris – then went to the Air France lounge for a bite of breakfast. Then on to the flight out of Terminal 2E-L. CDG (Charles de Gaulle airport) has a rather strange organization. Most Air France flight go out of 2E, but it is actually a set of three terminals, which they call halls in English. One has to take a train between the halls and there is more distance between them than between the other full-fledged terminals of CDG 2 (A, B, C, D, F and G). Perhaps Terminals H, I and J are in the planning? But these all called Terminal 2E, but then halls K, L and M. The nomenclature seems odd, but there it is. I suppose that’s enough of the vagaries of Parisian airport organization….
We began boarding about 15 minutes late. I was reminded again that no one likes a queue jumper as our British cousins sometimes say. I couldn’t see the entry for Sky Priority, the Delta-Air France early-boarding line for frequent flyers. As I asked the gate attendant where the entrance was, there were coach passengers watching me closely to make sure I didn’t cut in line, and a few of them motioned me impatiently to go to the back of the line, and wait my turn. But the gate agent said I was in the right place, checked my boarding pass and let me through.
Early boarding is a perk I really miss when I don’t have it. Not only does it cut down on wait time, but it allows one to have overhead bin space right by his seat. That saves a great deal of time and hassle when disembarking and allows easy access during the flight. It also offers up to an hour of time that can be used productively, seated, working a laptop or in a book instead of standing in a line. As it happened, departure was delayed then delayed again as transit passengers trickled on board, having had to go through enhanced security. Africa is high on security watch lists both going and coming, so all passengers go through more security checks that they would traveling to many other areas.
We finally left 90 minutes late for the seven-hour flight to Brazzaville, the capital of the Republic of the Congo, not to be confused with the Democratic Republic of the Congo, with its capital Kinshasa, which one can see across the Congo River. Congo Kinshasa, as its locally called, is a former Belgian colony, whereas Congo Brazzaville is a former French colony (the French didn’t want the Belgians to dominate central Africa, so they needed a Congo too). The now independent nations don’t always get along well. Crossing the river (which I have never done) can be a dodgy experience with many chances for corruption and various dangers. So those who can afford to, will make the 15-mile (23 km) trip by air, and pay hundreds of dollars to do so, which is one reason why Air France stops in Brazzaville before flying a Boeing 777 15 miles to Kinshasa….

Over the Sahara
I dozed on an off during the flight as most passengers did. I followed the flight map across the Mediterranean and the Sahara, which I find sublime from the air. The scale of the Sahara shocks the imagination. I have been around many edges of the great desert, in Egypt, Morocco, Mali, Chad, and Jordan, but have never penetrated into its heart. AS I get older, I have mixed feelings about trying to do so.
As we left the Sahara and flew over the shrubland and arid steppe of northern Cameroon, I noted we flew over some towns where I used to travel every year. The names Garoua, Maroua and Yagoua, all bring back vivid memories of arduous travel and dusty, arid towns. I served a small congregation in Yagoua for some years before everyone left the faith for reasons that are still not entirely clear, but appeared to be entirely material concerns. 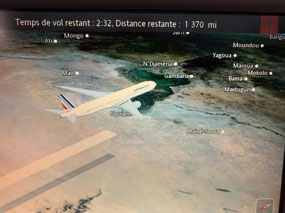 Flying Over Northern Cameroon
We made a hard landing in Brazzaville, but many passengers still applauded, that is still a custom here. Most passengers deplaned, Congo Brazzaville had petroleum, and so the economy is doing better than average for the region. A cleaning crew came on board, and cabin crews swapped places. We were on the ground about 90 minutes before making the 20-minute flight to Kinshasa. Another wide-body had landed from Belgium shortly before we did, so the immigration hall was wall-to-wall people. It took more than an hour to clear the formalities: go through health screening and show vaccination card, then enter the immigration hall, wait in line to show visa and get the passport stamped. This was also where the agent took my health screening form using information I had to upload in advance (and cost $45).
Then I entered the second health screening area where staff checked my yellow fever card and took my health form. Then I could enter the crowded baggage claim area. My suitcases were already on the floor in the Air France pile, so I was able to pick them out right away. Another agent came up and required me to show my baggage claim tags which he checked and kept, allowing me to pass. Finally, all my luggage had to go through a security scanner. As usually the agent at the screen wasn’t really looking at it. It was just a formality and he was being paid, but I’m pretty sure a Kalashnikov would make it through.
I walked outside the airport where the usual crowd was waiting. Some held signs, some craned for family or friends. The night was cool and fresh, in the 60s, a pleasant change from Dallas.
Justin was waiting outside with a taxi driver and another friend. We shook hands and said our greetings, then moved on toward the less expensive parking area, over by the old airport terminal to the north. Every dollar counts. I had another flood of memories of the old terminal with its overcrowding lack of air conditioning and entrenched corruption. Shades of immediately post-colonial Africa.  We found the taxi and loaded my bags. I kept by shoulder bag with me in the front seat, but completely under my leg so no handles or straps could be grabbed through the open window, just in case.
It was after 10:30 pm by this time, but the streets were full of pedestrians and lurching, belching vehicles in various states of disrepair. Our windshield was scarred from sand and grit so the oncoming headlights were often blinding, all normal. We made our way to the old Memling Hotel, the first luxury European hotel in Kinshasa, inaugurated in 1937 by Sabena, the former Belgian Airline which still owns the hotel. The hotel is named for Hans Memling a 15th century Flemish painter.
It’s been outclassed now by other more-modern hotels, but it’s still in good shape, regularly renewed as needed and good value for money in Kinshasa. I paid the driver, checked into the hotel, thanked Justin again for coming to meet me and asked him to come again tomorrow afternoon so that we can begin our work. It has been a long day!
Other Entries
-

Thanks for the commentary and the photos of the plane over land. It is awesome seeing the desert. It sounds like an exhausting day and we will pray about the success of your work there.

Thank you Mr. Meeker! I felt like I am travelling with you as you narrated the moments! Fascinating! May God bless all your work.

I appreciated hearing about this long trip. Praying for your safety and health. Will be praying about your meetings with the people in Kinshasa.

Thank you for taking the extra time in your travels to prepare these blogs for us!

Catching up with your blog and really great to read all the details of your trip!

Getting caught up on your many travels...loving your entries!