-
All brethren around the world seem to go through serious trials one way or another, particularly before the Passover. Satan is very active this year.

Here in Angola seems to be the same 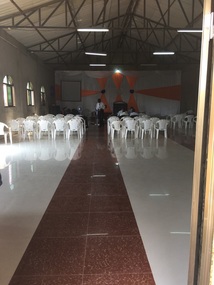 The church hall
. One of the elders here at the training session lost his 40 years old son last week due to a tooth infection gone bad. I am sure that elsewhere the tooth and abscess would have been treated before it would have poisoned his whole face and body.

Another elder has his daughter in law in hospital due to a bullet in her jaw. She was the passenger in the back seat of a car when a car with thieves 'thought' that they were following them and therefore they were shot. The bullet lodged in her jaw. She had to be moved from the hospital in Huambo (Angola's second largest city) to the hospital in Luanda as they there did not have conditions to treat her. She is awaiting treatment. However as the hospitals do not provide meals, the extended family is doing shifts preparing food and feeding her in hospital.

Today's seminar continued on the topic of baptism counseling. A lot was covered and discussed in detail taking up the whole morning and a great part of the afternoon.

Subsequently we proceeded into Sermonette training and spent a good time discussing how to develop a specific purpose statement. We will continue with that tomorrow.

Tomorrow morning at 8:30am we need to be at their local community radio station for a live interview for about 1/4 of an hour. Please pray that it will go well.
Other Entries
-

Praying for your trip and that God will give you His thoughts and His words tomorrow for the interview. And that His emotion and His enthusiasm will also flow as you share His living and powerful word! Keep up the excellent work and mission you are doing!

Jorge, Please let our brethren know that we will pray for them and share in their trials (1 Cor 12:25-27). Thanks for the updates, may God provide you the strength and inspiration to carry on your task.