4th day of leadership training and 1st day of UB

-
The training session continued on Monday 10th of April discussion some difficult scriptures as a follow up from queries on the Sabbath. The answers were more detailed for the leadership sake. 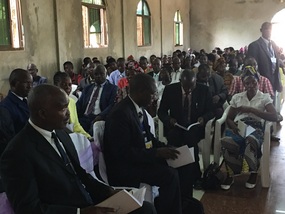 Brethren in services
. The official count was 550 brethren present (425 adults and 125 children). However a few came a little late and they appear to have not been counted. The extra had standing room only in the foyer entrance and could not get into the hall.

After services we started an interactive Bible Study at 2pm. It started with some choir singing and some poetry by one of the young people. The Bible Study ended at 4pm after many excellent scriptural questions and many of them from young people on their late 20's or mid 30's. It shows they are studying the Bible and asking deep questions which are well thought out. I do not know how many were at the Bible Study but I can well guess it was at least some 400 brethren (maybe even close to 500). The hall was packed.

At 4pm we concluded and allowed those that needed to catch taxis to far away locations do so. Some 100 brethren remained in the hall as they wanted to ask more questions which they did until about 6 pm. I was really impressed with these young people. Not afraid to ask questions - both guys and young single ladies. I was positively encouraged.

After that they sang a few more songs and the brethren brought me to the hotel at 7pm (Well after sunset).
Other Entries
-

Wow Jorge, this is so encouraging! Thank you for your love of the brethren and diligence in doing the work!

Thank you for the updates! It appears that your work is being blessed.