-
I don't know what I expected to see when we arrived this morning in Istanbul, but I can certainly say it's not what I saw! I knew it was a big city and I knew it has a population of over 13 million, but wow, this place is freakin' huge!! 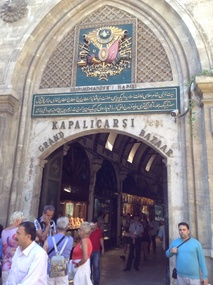 Grand Bazaar
We purchased tickets on a shuttle bus from the cruise line for $10 US which provided us transportation into and out of the Sultanahmet area. We could have walked it in about 45 minutes, each way, but it's stinkin' hot out there today.

Kier in front of the Hagia SofIa
description
Our first order of business was to get lost in the Grand Bazaar, a very easy feat as there are approximately 4500 stalls in the market. We MAY have seen 500. Kier found a very nice ring that he liked, and he might have ended up buying it too. Well, if the shop owner hadn't told him to leave and not come back! This fellow didn't realize that he'd met his match when it comes to haggling! Oh well, Kier didn't really need another ring!!

Blue Mosque
description
Then if was off to see something else besides the overly aggressive salesman of the Grand Bazaar! We walked further into the Sultanahmet area and looked at the Hagia Sofia which had a very long line to get in. A picture would do just fine there. From there we were off to the Blue Mosque. A picture would have to do there as well as there was an hour wait to get in. Some industrious young turks were trying to tell us it closed in 15 minutes, but they could get us in...yeah right...for a price! Admission is ordinarily free to the Mosque.

They really are everywhere!
description
Tonight was the Istanbul Sunset Sensation on the top deck where most of the passengers enjoyed a beautiful sunset. Although very nice, Kier and I didn't feel it lived up to the advertisement as the highlight of our entire cruise. It was nice, but not THAT spectacular. Judge for yourself with the attached photo!

Istanbul sunset
description
BTW, karma is alive and well in Istanbul...and for my comments in yesterday's blog about the woman having difficulty in the bus...well, karma's a bitch! I fell down the last step out of the shuttle bus today. Didn't break anything, but got a few bumps and bruises on my arm. Imagine if I was 80 something! Rest assured, if I was 80 something, I would have enjoyed Istanbul from the confines of the cruise ship!!
Other Entries
-

Starbucks AND McDonald's -- that's sad. And the very best sunsets on the planet are here on the west coast. I stood with hundreds of people in Ia on Santorini for what was purported to be the best sunset ever. At the end everyone burst into rapturous applause and Kendal and I looked at each other and said, "That was it?!"
So -- did you buy anything in the bazarre??

I have seen better sunsets on the Grand Lake, and it doesn't get as much hurrah. But, you've been there, done that and on to the next lap. Are you bored yet? I told you to be careful and you don't listen, now watch out for those steps they can fool you at times.

I wonder where my leather jacket is that I got in Istanbul in1977?
Best sunsets in THE world are in Hawaii!
I'm lining up some of my patients to beat you with their canes when you get back...well, I'm trying to line them up ;)

Did I buy anything at the Bazaar....no. I did buy a few little things at an outside the Bazaar shop on the road to the Hagia Sofia. One special thing I bought myself was a handwoven and appliqued wool pashmina. Probably paid too much for it, but didn't see anything like it in the Bazaar. Also bought some tchotchkes.

Patti, I hope your clients can't hit too hard and may forget after the first swing or two why they're hitting me ;)