-
Today here in Athens, I've finally learned the true meaning of that saying. There's some really old shit here!! In an effort to find something a little different to do in the city, I found a place that offered bicycle tours of Ancient Athens and pre-arranged a 2 hour tour. After our little fiasco yesterday wasting time looking for things, I thought I'd adopt the "ask and ye shall receive" approach and get some directions, even though I had pretty good ones already from the tour operator. It was more of a confirmation really. And that's where the first wheel fell off... We stopped to ask the nice lady in the terminal who was there to assist passengers. "No, don't take the metro" she said, "take the #40 bus. It's much closer than the 40 minute walk to the metro station". Now let me tell you, my research had told me Terminal B in Athens was either 20 or 30 minutes from the Metro Station, now she was telling me 40. Plus, she advised us to tell the driver we wanted to get off at Zeus' Temple. "All the driver's speak english", she said. That sound you hear...the second wheel falling off... The time on our watch is now 8:10...the tour is scheduled for 9:30. With bus tickets in hand we cross the street where directed by the ticket agent and wait. I look down the road...the next block down sits a #40 bus. I ask the people waiting next to us "Do those buses down there stop at this stop too?", to which they replied "we hope so cause we're catching that 843 bus that's sitting there". I explained that the 40 sitting behind it was the one that I wanted and I didn't know whether to run down the road to catch it or wait for it here. Note to self...don't take advice from tourists... you know what I'm going to say next, don't you...the bus turns right BEFORE reaching the stop we're waiting at... That clunking noise...would be our third wheel falling off. No worries...it's only about 8:30 now and my tourist friends said the buses come along every 10 minutes...yeah, right...like that gives me any comfort!!! Fortunately, the next bus does come along in about 10 or so minutes and we board, tickets in hand, validate as per EVERYONE's instruction...that seems to be a very important part of bus transit in this city...and ask the driver if he knows where the stop is for Zeus' Temple. This is where I so wish I could write narrative with an accent...it just doesn't do it justice without hearing the accent. The only way I can describe it is to refer you back to Boris and his wife in the old Rocky and Bullwinkle cartoons...I know they were Russian, but who the heck knows...this bus driver may well have been Russian cause he said "Niet, dough-na (ph) know dat" and brushes us off, rather rudely I might add. Picture this...on a bus in a foreign country...people are supposed to speak english, but seem fairly limited to simple "yes" or "no". So out of pure desperation, I start up and down the bus aisle with my written directions from the tour operator in hand asking passengers if they speak english. Now each one I ask says they do, but when I ask what stop to take for Zeus' Temple, you'd think I was asking them for the Caramilk Secret because without fail, each and every one of them tilted their heads to one side and looked at me like I was...well...from far, far away...further than Canada, even! At one point we had three passengers reading over my e-mail from the tour operator and trying to figure out where we needed to go. The problem here lies in that they discussed it in Greek, read over the e-mail, discussed it some more and then handed me back the e-mail and said nothing to me...over and over again. When I'd ask if we were getting close, the response "Ja, Ja". It is now 9:30 on the clock and the scraping noise you hear is the entire chassie dragging on the ground as the fourth and final wheel has fallen off! 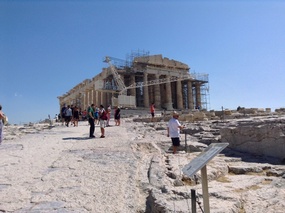 Parthenon (Parthenonas)
description
. So, I changed my tack. Now I just started asking if we were close to the Acropolis, and finally, we were. Off we got and were able to find the metro station and ultimately the tour operator. This was more an exercise in "git r done". That and I thought it only courteous to advise the operator that we were held up although I had no expectations of being able to catch up with the tour. Alas, good fortune and the gods of Greek Mythology were shining on us as Manos was waiting at the office. The 2 other customers had not showed up, so we were the first and only customers to arrive. Better late than never, we were off on tour. We had a fabulous time and enjoyed ourselves immensley. After the tour we spent a bit of time around the Plaka. One thing I did learn today...okay, I learned a lot today...but shopping wise, I learned that prices are much higher in Athens than they were in Corfu.
Other Entries
-

Wow...do they ever work slow in Greece -- the Parthenon was covered in scaffolding when we were there in 2008, but I see it is now on the other side. See, that's the problem with this old stuff -- it keeps falling apart!
Have to say I admire your tenacity to 'git r done'!!!!

Doesn't this tell you something? Or has the Senior Stage set in already.

Had a good chuckle reading about your adventures in Athens...... It's always so much fun trying to find your way around a foreign country ;) Just make sure you make it back to the boat on time. Sue G & I almost missed our boat when we were in Venice many many years ago!