-
What a beautiful place, but oh what high cliffs. Today we hiked the volcano at Nea Kameni off the coast of Old Fira Port. It was a great day for a walk with sunshine and 28 celsius. I booked our tour in advance after finding good reviews for the company on tripadvisor. Plus, I got our tour for 12 E each instead of the 15 E each that walkup customers paid today. Along with the confirmation I received after booking, I also got a link to some tips for the tour. But let's be honest here...this is advertised as a strenuous hike UP A VOLCANO. This is not advertised as a Sunday stroll in the park. Well, I'm here to tell you, 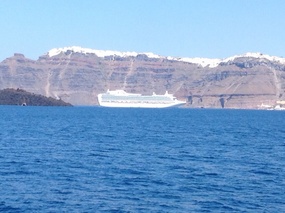 these things just don't always go together! There were all kinds on this tour: young girls wearing flip flops; elderly people with canes or walking sticks; middle aged men with the obvious scars of heart surgery and the huffing and puffing of the three little pigs' very own big bad wolf. Really...you don't think that maybe you'd pick another tour if you had to have bare feet exposed, walking aids of some form, an oxygen mask, or all of the above? I had a hard enough time with the walk/climb and I considered myself to be in reasonable shape. You'll notice that I phrased that in the past tense. After today, I no longer feel that way. I'm fairly OUT of shape based on today's performance! The second part of the tour was much easier. We boated to a hot springs and had a refreshing swim. 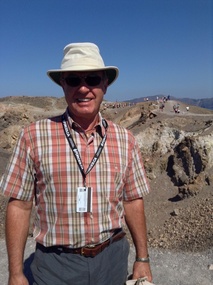 Nea Kameni
description
. For any of you that don't know, there are 3 ways to get waaaaaaaaay up the mountain from the Old Port to the town of Fira. The first is by donkey, the second is by cable car and the third is to walk the 580+ steps. Trust me when I say that walking was out of the question after the hike we had done earlier. So that left donkey and cable car. We decided to do one each way, and it only took a second to decide that we'd take the donkeys up because taking them down that very steep cliff would be just too scary.

It is safe to say, that is an experience that I will NEVER EVER need to repeat, but we did it. These creatures were smelly and stubborn and we ended up getting off them about 100 steps short of the top. There was a group of about 6 donkeys that just refused to complete the trip. Why didn't the guide make them move you ask? Because there is no guide. Someone helps you into the saddle at the bottom and off you go, no guide, no reins, no nothing. These stubborn mules just head on up on their own. And not straight up, but on a zig zag road up a very steep cliff, with quite low walls on either side...yowza! I must add that the clearly posted sign at the bottom of the cliff which stated that all donkey rides were fully insured left me with little comfort!

After a little bit of touring around in Fira, we headed down on the cable car and back to the ship...exhausted and anxious for a shower, dinner and some well earned rest!
Other Entries
- 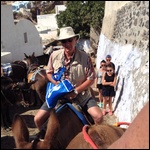 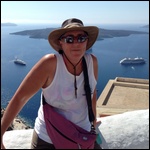 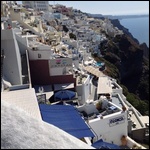 OMG! Are you brave or crazy?

Nice pics...that looked like quite a climb! I can't imagine then sending donkeys and no guide with you! What anexciting time you guys are having!

Haha...we noticed the exact same thing on the volcano -- all the inappropriate footwear. Didn't you think it would be a great setting for Mordor in the Lord of the Rings?
Kind of surprised the cruise line didn't ask you not to take the donkeys. There was a big push a couple of years ago to get people to stop riding the donkeys.

No, they never mentioned it one way or the other. Lots of people were making comments about the whole cruelty aspect of the donkeys, but there was no end to people doing it.