You call that DRIZZLE!

-
Last evening we went to our first ever "Production Show" on board this cruise, and after the rather disappointing event, the cruise director announced that we may get some "drizzle" while in Kusadasi today. Well, I'm here to say, that was no drizzle!! I'd call that a small typhoon! The winds were so fierce that we broke free from the dock and drifted out into the bay. After a few panicked announcements, we got the all clear and everything was under control. As this happened at midday, there were several people stranded on shore until we could get back into dock over 2 hours later.

Today was our last stop in Turkey, so we went ashore early this morning and did some final souvenir shopping 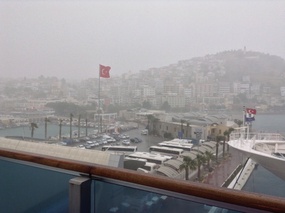 Kusadasi port during the rains
description
. The torrential downpour cut our visit short. Don't think we missed anything too exciting as we opted NOT to go to Ephesus to see the ruins. Figure we'll see more of that when we get to Rome. I know, I know, different ruins entirely...but...they are all starting to look alike to me now!! The pottery, linens, leathers and such, though, NEVER get old!!

While we were in port, however, we stopped mid morning for a small glass of beer. It's becoming somewhat of a tradition, and happening earlier and earlier each day. Today, in honour of you guys, Mike and Sue, we had a drink at Murphy's Pub...who knew...it sure doesn't sound like a Turkish name...or a Greek name for that matter, but there was a Murphy's in Santorini as well. What's that about???

We've reached the halfway point in our cruise...10 days left and then they boot us off in Barcelona. Guess I'll drown my sorrows with ....hmmm...I know, another meal!!! Off to the dining room!
Other Entries
-