Have you ever been to sea, Billy? Part II

-
Another sea day and aside from lobster for dinner, I had no luck at all. I played Bingo today and the jackpot was $1300 if it went in 54 numbers...well, it didn't. But after 56 numbers I was sitting waiting on one number to yell Bingo for $400...and it was my all time lucky number that I was waiting on...9. I was absolutely CERTAIN that it was a sign that I would win. I was waiting with baited breath...and the 57th number was called...it was...24...and some woman in the back yelled Bingo. Damn...apparently number 9 is NOT my all time lucky number.

Off I went to the slot tournament 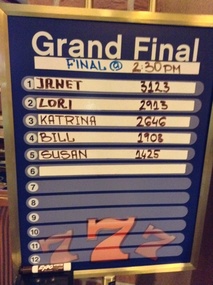 A good time, but not a long ti
description
. The prize there was $500. Okay, so Bingo isn't really my game...but slots...now that's right up my alley. As you can see in the photo of the tally board after my turn, I'm placed third and the top 6 get into the final. I returned an hour later....and I'm no longer in third place...nor fourth, fifth or sixth. I'm out of the running. Just as I was last week. But, there's always next week.

I saw a great movie under the stars tonight. The Way, Way Back with Steve Carell. It certainly wasn't a comedy as he is used to being in. In fact, he played a rather nasty character. It really put me in mind of the old movie Little Miss Sunshine. Quite good, all in all.

Last of all this evening was the comedy of George Casey. He's from Ireland...need I say more.

Well, it's off to bed for some much needed sleep as the next 2 days are going to be long and busy.

Had to wrap your feet in flannel was that the results of your fishy soak? Didn't see Kier's picture getting his feet nibbled.

Eating popcorn and pizza, watching a movie -- that's my kind of night. Add in a cruise ship and that's pretty much heaven on Earth. And I'm sure you were washing it all down with a nice cold beer.

Nope, feet are fine, but it was cool last night. Couldn't talk Kier into the fish tank cause he's a wuz...and has ticklish feet...

The pizza and popcorn were actually washed down with a vodka and lemonade...I know, odd combination...but the vodka was from our complimentary mini bar and the lemonade was the only free thing in the buffet that would go okay with it. Ya gotta do what ya gotta do!