That tower really does lean!

-
Today is Livorno, and all I can say is "thank heavens for Pisa", cause there's NOTHING in Livorno. We had a decision to make as to whether to go to Florence, Pisa or stay in Livorno, and opted for Pisa. Florence is over 1.5 hours by train and we already did one of those long train rides to Rome. Pisa is only 30 minutes by train, so that was what we expected to do when we shuttled to town from the ship. When we arrived, however, we found they had put on a tour bus direct to Pisa. No bus to train station, then train ride and then walk to the Field of Miracles where the tower and other attractions are located. So for 15 E we were all in. It would have been a bit cheaper to do public transit the whole way, but much less convenient. So off we went to see the tower. We arrived at the bus parking area where there were more tour buses parked than Kier says he's ever seen in one place before. Buses as far as the eye can see. The driver parked, jumped out of the bus, and fled the area with not so much as a "howdy do".

Being resourceful people, we weren't long finding our way to the attraction 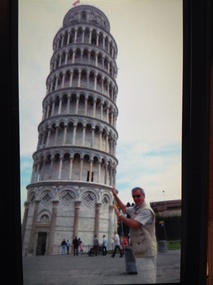 Leaning Tower of Pisa (La Torre di Pisa)
description
. I must say, had I been of more "senior years", I might have been pissed enough to give the tour operator a piece of what's left of my mind. They distinctly told us that the bus would take us directly to the Field of Miracles, whereby if we took the train, we would then have to bus, or walk, from the train station to the site. Well, I'm here to say, I don't know that the walk from the train station could be any further than what we walked from the bus drop off to the site. And it was a bit like running the gauntlet of street hawkers and their wares. Everything from "genuine fake" ray ban sunglasses to rolex watches and Prada handbags. And these guys are relentless. Express any interest and they're like a dog on a bone. There was one chasing our bus out of the parking lot because I had asked through the window what the price of one of his Prada bags was.

It was a beautiful day with just nice temperatures, so the 15 - 20 minute walk was not an issue for us young people with a large breakfast to wear off. We had hopes of walking off our breakfast by climbing the stairs of the Leaning Tower, all 294 of them. Unfortunately, we had an hour wait before the next climbing tour started and there wasn't enough time to catch our scheduled return bus to Livorno. So we just walked around, did a little inspecting, and had Kier try to prop up the building (as you can see in the photo). Once we determined there was no risk of it falling, we were on our way. We did a quick walk about in the Cathedral while there, and then headed back to the bus area. This was the spot that I had decided a nice cheesy souvenir was in order, so I purchased a little replica of the Tower for 1 E.

Next thing you know, we are back in Livorno where most every shop has shut down for the afternoon. The shops have weird hours here. Open in the morning until 12:30 or 1:30 and then closed up till 4 pm. Oh, the business they are missing out of from the 4 cruise ships in port today!!

Tonight on board the ship? Packing, packing, and more packing! Oh, and to bed early. We've got a really early start tomorrow as we are taking our one and only excursion with the cruise line. It's to a place called Cinque Terre. It's been highly recommended to us and it would have been less than straightforward to travel on our own by train.

Ciao from Livorno!
Other Entries
-

I bet holding up the tower was quite a feat for K. job well done!

Have you reached saturation point, where if you've seen one church or ruin you've seen them all??

I know of what you speak!! Several of us around the ship have commented that we can't bear to see one more "ruins". We have gone very light on the churches, to date, so the duomo in Pisa was the first we actually went inside. Regret not getting into the Blue Mosque in Istanbul, too, as it was likely impressive!

I'm looking forward to seeing something not ruined.

They certainly don't take very good care of their "toys" around here...everything is ruined!!