Mamma Mia! Something to see-ah!!

-
OMG what a day we had. This place we went today...fantastic. It's called Cinque Terre and that's pronounced "chink-wa tara". It's about an hour's drive from Genoa and to travel on our own would have required a shuttle from the pier, a bus to the train station, change train in La Spezia and then different trains to the five different villages/towns in Cinque Terra. To save ourselves the hassle we booked an incredibly overpriced cruise ship excursion. There were 6 buses that went from our cruise line and we also saw groups from several other cruise lines as well. This was one busy tourist area today.

Now, Kier and I are not "group"" people 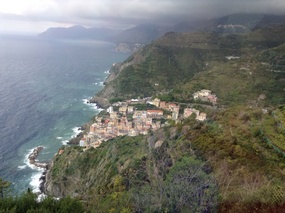 the 'high road' that I took to
description
. We don't particularly like to travel in large groups, we don't socialize in large groups. We like small groups of people that you can interact with. Maybe 8, maybe less. So from the get-go, this whole tour was not our thing. But, it served a purpose. It provided us transportation to an area that after 20 days traveling, we didn't have the energy to suss out for ourselves. I just have to add that the tour description was very straight forward. It identified, quite clearly, the need to be able to walk steep and sometimes rugged terrain, and several sets of stairs, from the tour bus parking area to the villages and the train stations. In fact, it was identified as a "strenuous walk". And with these tours, you are required to keep up the pace with the guide and the rest of the group; be at established locations at specified times; and generally, be punctual as a courtesy to others in the group. What would ever lead someone with a cane and mobility issues to believe that this tour was for them? And what's with the cruise line for not telling this person when they ordered their tour tickets that perhaps this was not the tour for them? That old saying "there's one in every crowd"" applied today 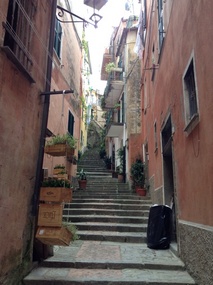 walkway in Monterosso
description
. I really had to bite my tongue. I really wanted to ask this woman "What were you thinking? What did you think 'strenuous walk' meant?", but I took the high road...literally, as you can see from the photo!

Had I learned about this place a few months before we departed on this trip, I surely would have planned an independent, small group tour for this area and it would have been that much better, but, let me tell you, it is something to see. If Malta was a place that I could see me visiting again, then Cinque Terre was a place I could see me LIVING! This is Tuscany, baby! The heart of the Italian Riviera!

After a very long day of "hurry up and wait", we made it back to the ship in time to pretty up for our final formal night. Did I mention that we had 6 formal nights on this cruise...that's about, oh, 5 too many, in my book! Then it was off to see a comedian, and pop in to the casino for a short visit. I've gotten rather friendly with one of the female crew members there, so I had a bit of a conversation with her and she had the ""house" buy me a very large pina colada.

Then, back to the room, and to bed after a very long day that started way too early.
Other Entries
-