Our pilgrimage, our Mecca

-
We finally made it, to the "homeland", if you will, for casino lovers...and for lovers of wealth in general, actually. We were up and off the ship by 9 and did a complete walk of the sites of Monte Carlo. Our first order of business, to no one's surprise, I'm sure, was the casino. The casino doesn't open until 2, and we're "all aboard" at 1:30. They had the foyer open for people to walk inside, but photos were forbidden. I have to say, they could have allowed the photos, really, cause there was absolutely NOTHING to see, short of big, high ceilinged foyers and halls leading to the "promised land". We had heard there was an admission charge to the casino, and determined that, if open, 10E would have been the cost to get inside. I can safely say that Kier and I would have ponied up that note with little complaint!!

We made our way to the new shopping area on Grimaldi Street and Princess Caroline Street, but found little open 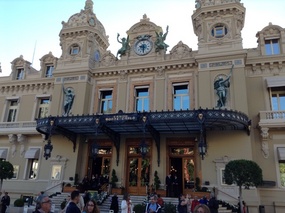 Casino of Monte-Carlo
. Again, a cruise ship in with thousands of people and several shop owners either took their time opening, or couldn't bother at all. I guess the economy around here is such that a few tourist dollars must not make a difference.

We walked up to the old city and viewed the Prince's castle. Quite modest when compared to the British Royals' residences. And we finally found some souvenir shops open for business. And you'd think these shop owners were looking to make their entire year's profit from this boat load of tourists. Man...were their prices high...but being the only game in town, we paid the price for the little bits and bobs.

After a very brief few hours in port, we are now on our way to our final destination, Barcelona. It's hard to believe that 3 weeks are almost over. I remember Dubrovnik as if it was...well, 3 weeks ago!

The rest of the day has been busy with tying up the usual loose ends of a cruise...checking my on-board account; submitting all the employee nomination forms I'd written up; donating a couple of books we'd finished to the library; and losing the final Snowball Bingo.
Other Entries
-

So you made it all the way to the "homeland" and didn't get to play?? How sad!!