The bad taste in my mouth is going away

-
After getting settled in our room, we quickly organized ourselves to head out to do some touring here in Barcelona. But not before I stopped in the lobby and spoke to another couple who arrived from the cruise ship. I confirmed with them that our cab fare should have been between 13 - 15 E and not the 25 E he charged us. All I can say to that cabbie is "shame on you", oh, and maybe that "karma's a bitch...and she's gonna be looking out for you!". 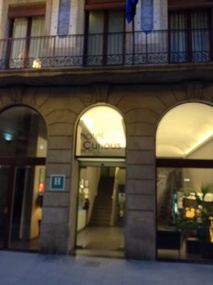 Hotel Curious...I was, so I bo
description
. On our way to the metro we landed smack dab in the middle of a protest. We still don't know what the purpose of the protest was, but there was some pack of them, and were they riled up!! We didn't stay long in that area, but asked the local police for directions to the metro line we wanted. They were out in full force today! When we arrived back at the hotel, we asked the front desk clerk what was going on today in the park. She replied that it was "a contest". I was thinking "shit, I was right there and could have been involved in that...and maybe won something!! Shortly after, I realized it was her english...not a contest...how about a protest!!

Let me tell you this. There are churches, and then there are churches. Salgrada Familia is just un-be-lieve-able. The size, the stained glass, the design. Something to see. I'd highly recommend it to anyone who comes to Barcelona. I'd also highly recommend that you buy your tickets on-line, because the line to get in almost circled the whole place. Fortunately, we had booked ahead and included going up in one of the towers. Wow, talk about high up...and talk about a long way down! You go up in an elevator, but walk down in a verrrry narrow, circular staircase. I was very dizzy (yes, dizzy...not dizzier) when I finally made it down. I'm sure it was every bit as high as the Leaning Tower of Pisa would have been if we'd been able to walk that!

After a couple of hours there, we headed to another metro station to make our way to the Casino Barcelona which is very close to the Olympic site. We walked all over the area (because we were lost, not to see the sites) until we found the Casino. When we both got tired of winning all that money (yup, I'm dreaming again!) we headed back to our hotel for a restaurant recommendation. For sure, this is one city that we could NEVER live in. These people don't eat dinner until after 7:30 at night! I'm ready for bed by that time!! We did find a place nearby and had something that resembled a meal, then went for a walk around the touristy area called Las Ramblas. I can't tell you how many people were out wandering around that place. Wow...the crowds!

Well, tomorrow we head to the airport and back home. Life must return to normal eventually!
Other Entries
-

Friday night was a bigger protest wih the police arresting 29 people and firing rubber bullets and clubbing protesters....but I think if you told the you just wanted to get to the casino, they might not have shot at you ;)
They were protesting a Europen summit that was being held just outside Barcelona.

Ouch! Glad I missed that one!!