-
After a very good night's sleep in our nice little hotel, we were up early for our complimentary continental breakfast. I must say, I was a bit concerned that the hotel would have been really noisy last night being so close to Las Ramblas, but due to our location within the hotel, it was very quiet. The view was no screaming hell, though! It was a tad hot too, but with the balcony door open, it cooled off nicely. It did have a lift, but you could only fit one person with luggage in it at a time. Typical of these European hotel elevators.

At the last minute, we decided to give the airport bus a try 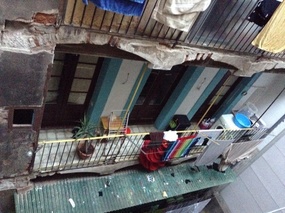 the view from our room...not p
description
. They told us the name of the service was what sounded to me like "Idle bus". So off we walked for our 5 - 10 minute hike to the bus stop, which the front desk clerk assured us we couldn't miss...and low and behold, we found it. Only had to ask one more time for directions. And to our surprise, the name of the bus was "Aerobus"...but their pronunciation of it was like "I-row bus". For 5.90 E we had a smooth bus ride with only 2 stops enroute. If anyone is coming to Barcelona on holiday, I would recommend a hotel around Catalunya Place because it is smack dab in the middle of everything. Close to Las Ramblas, the Metro, all the hop on hop off bus tours and the Aerobus.
And, for you radicals, the usual site of any civil uprising. We did finally learn the reason behind yesterday's protest. It was Columbus Day yesterday...recognizing the day Columbus discovered...hmmm, we're not sure what...would they actually have a holiday in Spain for when Columbus discovered America? Who knows...maybe. Anyway, suffice it so say, it was a national holiday and a good day for civil unrest 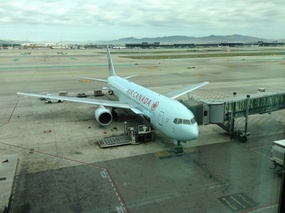 the plane taking us home
description
. Apparently they had a similar protest back in September with 1 million people attending. They didn't get the numbers this time...but I sure thought they did!! When I asked the purpose of the protest, I was told it was something like our Quebec/Canada situation. That was a great analogy...I understood completely. It's an issue around national unity.

I can't stress enough to people the value of "on-line check-in". It has saved us several times from standing in long queues at the airport. Today was another example. When we arrived...early....at the airport there was a huge line at Air Canada with about 100 or so people in it. My keen eye found a different queue set up for "baggage drop" with NO ONE in it. Off we went, past all those waiting to check in at the counter, dropped our bags and gone within minutes. Then we were through security and through customs. We did make one little misstep, though, when we cleared customs and got into the secure area we looked down to the lower level and saw all the fabulous looking shops...that we could only have accessed BEFORE clearing customs. Once up top looking down, it was a matter of "you can't get there from here".

Our plane is in and we're getting ready to board for our 9 hour flight to Toronto and then on home. Other than the odd little, and I do stress little, hiccup here and there, it's been a 5 * holiday all the way.

Adios from Barcelona
Other Entries
-