Dorothy, we're not in Kansas anymore!

-
I guess I’ve done a lot of cruising. I never really thought of it before, but today when I struck up a conversation with a couple on the shuttle bus, it made me realize just how much we have done. There were two different ships departing from Port Everglade’s this afternoon, and the shuttle was delivering passengers to both ships. The couple in front of us were talkative, so I asked the inevitable question. “Which ship are you on?”, to which they replied, “the Coral, going to the Panama Canal”. “Oh”, I replied, “we’re doing that one in September”. Then they mentioned they would like to do the circumnavigation of Australia, to which I replied “we loved that one”. They said they were also thinking of New Zealand. “We loved that one too”. They asked if we’d done the Mediterranean. “Why, yes, we have, and a Transatlantic”. Add those to all the Caribbean cruises and it’s no wonder we’re very close to Elite status with Princess.

I debated about whether I would blog this trip or not 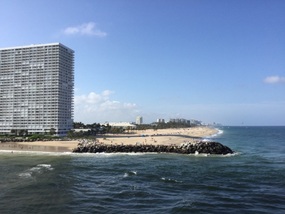 Saying good bye to Fort Lauderdale
description
. How much is there to say really, after this many cruises. Will there be anything new or surprising? Well, first of all, I generally take cruises where the average age is in the low 80’s…so imagine my surprise when we strolled around the pool deck to find it swarming with kids. It is Easter Weekend…when people can take their kids out of school for a few days and hop a week long cruise. What should I have expected? Well, what I didn’t expect was the notice circulated to each and every cabin on Princess Cruise Lines letterhead stating that this was a busy time of year for families on the ship. No shit, Sherlock…even I figured THAT out!! But then they went on to advise parents that they were responsible for the actions and behaviour of their kids. Wow!!! Was NOT expecting that! Nice touch, Princess. But will they have the gonads to enforce that when the parenting gets lacks…or when the parents simply don’t hold their kids to the same standard as the rest of society does? Time will tell!!

This whole cruise was a bit of a last minute thing 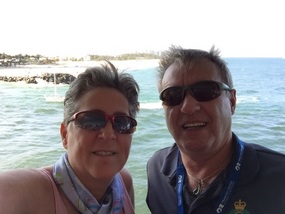 Sail away
. When decent priced cabin converged with reasonable priced airfare, I booked right away. The only cabins left were “ocean view obstructed”. Ehyn…who cares…it’s only a week…in the Caribbean…we’ll spend most of our time on deck. As long as I can get some light through the window, that’s good enough for me. Imagine my surprise when we got to our cabin and found a lovely big room and a fantastic view…totally UN-obstructed! Bonus! The only thing left that can either make or break the rest of the trip is our dining room assignment. I requested my usual table for two…sometimes we get it, sometimes we have to make an issue. It’s just so much more convenient if we get it right off...without the need for an issue. And…bingo…got it! I’m a happy camper. And our table is almost beside a window. It doesn’t get any better than that. The table for two option is becoming more and more popular. The way the ships handle it is they clump several two tops side by side, and close enough that it’s almost like you ARE sharing a table 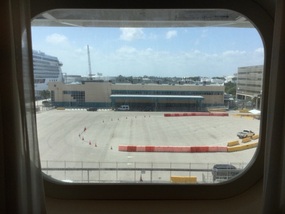 A lovely UN-obstructed view
. So the next hurdle becomes your table neighbours. They can be good, or they can be…well…not so good. It’s sort of hard to tell on the first night, but I think I can best described the couple beside the window as Ralph and Gladys Kramden-stein. They are a chatty couple, currently living in Florida but originally from New Yawk! The couple on the other side…jury's out on them as yet. But suffice it to say they both require “gluten free diets”…and they never spoke to one another for the first forty minutes of dinner. Needless to say, they didn’t speak to us, either. Fine by me. If I wanted table chat I would have asked for a larger table.

I’m currently sitting on top deck watching Spectre on the Movies Under the Stars. Definitely NOT the movie to watch if you’re trying to forget about your upcoming holiday in London…just saw the London Eye!! Anyway, there’s a good line up of movies this week, and if the Roulette Wheel is at all hot for me during the cruise, it can’t help but be a spectacular week!

Stay tuned as I EAT my way through seven days on the high seas!!
Other Entries
-

I've had table mates I've stayed in touch with for 10 years and others that I was hard pressed not to impale with knife and fork. Always a crap shoot. Good luck to you!

Ha ha...what is worse? A floating nursing home or hundreds of kids running around? Can't wait to hear your conclusion! Enjoy!