The fourth time's the charm

-
After three times on previous cruises that our port of call at Princess Cays was canceled, today we finally got to see this elusive island. This stop is on the island of Eleuthera, Bahamas and is supposedly owned by the cruise line. It’s what can only be described as a “cash cow” for the ship, but a great spot if you’re a beach lover. Kier and I…not beach lovers. We did want to see this place that up until now has been very difficult to get to. We boarded a tender at about 10:00 for the 15 minute ride. We went, we saw, we returned…back on board by 11:00. Enough said.

Our day today, however, started awhile before our 10 am tender departure 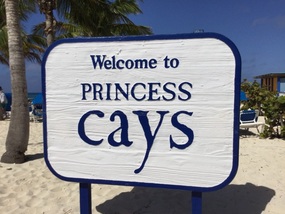 jpg
. We were up fairly early in order to catch the week’s first Speed Sudoku challenge. It’s as much Kier and I competing against each other as it is competing against other passengers. Alas, today it was just Kier and I going head to head. No one else showed up. Needless to say, I won in record time. Okay, I don’t really know if it was record time or not, but the crew member running the challenge was impressed. Kier came second…or first of the losers, as I like to say. What was interesting about our participation in the Speed Sudoku was not so much the sudoku as it was a story told to us by our new friend, the crew member.

This story falls under the category of “it takes all kinds”. Our “friend”was in charge of the karaoke last night. There was a small group in attendance, and no one was keen to jump up and start the activities. Inevitably, the group required some prodding, and it was the role of our “friend” to provide that. He told us about a couple who sat in the front row of the lounge, very near the stage 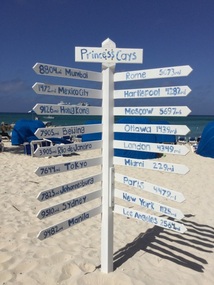 1-jpg
comment
. In a position that can only be interpreted as interested. I mean, if you were shy and retiring you would likely sit at the back, where you can see, but not necessarily be seen. The man of the couple sat with arms crossed, which, in hindsight, should have been an indicator. In an effort to rally the crowd and stir up some interest, our “friend” started interacting with the audience. To engage with them he started by asking if anyone knew the meaning of the word “karaoke”? He turned to the couple in the front row and ask the man “Sir, do you know the meaning of the word ‘karaoke’”? The man’s reply…”stick it up your ass”. Really? Is there any need for that? Just goes to show…it takes all kinds!

It was a very relaxing day, all in all. With the majority of the passengers ashore, we found some nice shaded lounge chairs near the pool and enjoyed some swimming and reading time. Then we squeezed in time for a nap before dinner. Last night I opted for 3 courses of vegetarian dishes, and enjoyed every one of them. Tonight I changed it up and added salmon to my order. And then, of course, dessert. I opted for the Sugar Free Coconut Cake…and who knew that sugar free could taste so good.

We had another interesting exchange with Ralph and Gladys. Upon comparison, we decided that we enjoyed very similar itineraries. Who knew we had so much in common with an elderly Jewish couple? Our friends on the other side, lets just call them “the honeymooners”, cause they’re celebrating their 35th wedding anniversary this week, were much chattier tonight…well, he was…she continues to be non-verbal. There are about 8 tables for 2 along the wall where we sit, and a long leatherette bench provides one seat for each of the tables, with a chair at each table for the second table mate. Mrs. Honeymooner has taken to moving over onto the bench beside her husband to play lovey dovey between courses. How….hmmm…romantic??

Tonight I’m watching the Bridge of Spies. Seen it before but well worth a repeat. Afterward I’ll be off to test my luck on the roulette wheel!

Hmmm…maybe I’ll check out the karaoke afterward. Seems like there’s potential for excitement there!!
Other Entries
-

When we went on a Disney cruise, a day at their "private island" was one of the best parts of the cruise. Spent the entire day -- and I mean the entire day -- snorkelling. Very cool swimming with the barracudas! But I've also never been so sunburnt in my life. It's amazing how much of your back and ass sticks out of the water while snorkelling!
Love the karaoke story! Good thing that guy isn't sitting next to you at dinner!