Lower the cone of silence, Agent 99!

-
Nice day here in St Thomas today, although we really didn’t venture far from the ship. We checked out some of the shops around the port and I continued my perpetual hunt for free wifi. I was hoping to dock at Crown Bay because they have a great little pub there which sells beer for $2 and offers free wifi for as long as you can remain upright in your chair. Last time I sat there all afternoon and wallowed in social media for hours, all at no additional cost! Due to the scheduled arrival of the Allure of the Seas, which is THE biggest cruise ship on the water today, we got bumped over to the OTHER port, in Wico Bay. As it turns out, the free wifi options are plentiful around this port, as well, and I was able to get connected a few times to check emails and the like. There just wasn’t a nice cool and comfortable sitting area which provided $2 beer to make the day more enjoyable.

After Kier got tired of dickering for jewelry, we headed back on the ship

. But I had a plan! If I took up a position on the side of the ship nearest the shops, down on the Promenade Deck, I would be close enough to “borrow” that free port wifi, instead of plugging into the very expensive on board version. I mean really, is one hour of wifi that I don’t have to pay the cruise line for actually going to break them?? I think not. Don’t even get me started on what I think of having to PAY for wifi on the ship here in the 21st century!! But that’s a rant for another day!

Well…I will certainly admit that I’m no techy. I can hold my own in some computer circles, but I really only know the basics. And I certainly don’t know how to circumvent what must amount to a “cone of silence” which Princess must encircle their ship with in ports like this where free wifi is readily available. I could SEE the networks, I could CLICK on the networks, but for the life of me, I could not CONNECT to any free wifi networks that were available mere yards away. I could see nothing other than a very simple, low tech chain link fence between me and the shops 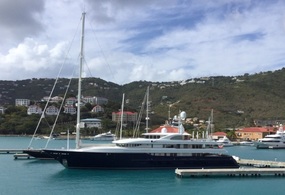 Where did I park my boat? Oh THERE it is!
. How does Princess do it? Have they got some fancy radar thing that blocks the frequency or airwaves or something? There’s no point in asking. God knows I battled with their “internet powers that be” on my last cruise over something that they swore wouldn’t happen…which worked out in my favour in the end. I so wanted to do the ole “nah nah nana nah” in their face that time, but I didn’t want to lose the ton of extra free minutes that turned up in my account…this was after they said “no, you won’t be getting any more free minutes”. Needless to say, when it comes to their own internet “system”, they don’t know if they’re gigabytes or motherboards! But I digress. Fortunately I have enough of my “free” minutes remaining to carry me through to the end of the cruise.

What I love about days like today is that when we return to the ship 3 hours before “all aboard” we can find plenty of lounge chairs around the pool. Now, not around the big pool. The one with the movie screen and the thick cushions, but around the other pool where the chairs have no cushions whatsoever 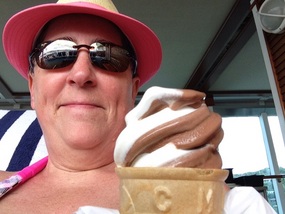 Make that EIGHT desserts in Seven days!
comment
. The upside to this pool is it’s oh so close to the outdoor grill, the pizzeria and the ice cream bar. Which can either be a good thing, or a bad thing.

It was a great afternoon. The water was warm, the sun was hot. And the kids…well, they were loud and rambunctious. Where their parents were, is anybody’s guess. There were 5 brothers who performed continuous cannon balls into the pool. I know I’m IN the pool…so fully submerged in water…so why would I be opposed to getting splashed periodically? Well, I don’t want to get my Maui Jim’s wet, or worse, damaged, of course. I’m not a buzz kill. I don’t want to hinder some kids fun…but really, could they not confine all the kids to ONE of the 2 pools? I’m guessing I’m not the first to suggest that. We don’t have to worry about this type of thing on most of the cruises we do…cause the average age of most of our cruises is late 70’s, if not 80's. I’m beginning to think that that’s not such a bad thing after all. Well, except for when you’re behind them in the buffet line!

Tomorrow is the port of call I’ve been waiting for. The one we booked this cruise to see. Turks & Caicos, here we come!
Other Entries
-

Before iPads, before wifi...just what did you do on a cruise?!