-
It’s only taken us 6 days, but we’ve managed to establish some semblance of a schedule. It’s not an easy thing to do on a cruise ship, let me tell you. But this is what most of our days look like:

Wake up
Speed Sudoku
Breakfast
Lounge by the pool
Maybe even swim
More lounging or if we’re in port, then go ashore
Maybe lunch, or at least a snack
Retire to the cabin for a nap (all that lounging is tiring!)
Get showered for dinner
Dine
Movie for me, casino for Kier (he is playing with THEIR money now, after all)
Back to the cabin to rest up
Go to bed
Rinse and repeat!

The only thing that changes is the menu and the movie!

Well, today we were in Grand Turk and it was a resounding “ehn” 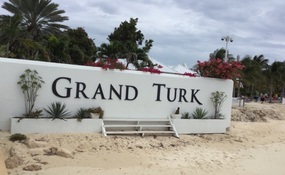 jpg
. Another Caribbean Island with a beach and more tchotchke than you can shake a stick at. There’s even a Marguaritaville right at the port…but do they have free wifi? Nope. No doubt that’s an agreement that’s made by the cruise ships that none of the retailers in port can provide free wifi. I mean, who would buy the cow if you could get the milk for free? Hmmm, for some reason I don’t think free wifi was what my mother had in mind when she told me that when I was younger. In fact, it couldn’t have been, cause “wifi” was nothing more than a misspelled word when I was a kid.

Try as I might, I just couldn’t leave any of my cash in Grand Turk. I did try to buy a can of Pringles…but who could see fit to pay $6 US for 1 can? Certainly not this chick! So it was back to the ship for French Fries instead…at least we KNOW they are made from real potatoes!!

Okay, back to the movie, the Martian. Tomorrow, our last sea day before returning to Fort Lauderdale. It’s also Snowball Jackpot Bingo final…get out your bingo dabber everyone!
Other Entries
-

Well at least you got to see a good movie!