It's that time again!!

-
You knew it was coming…you just didn’t know when. It’s time to drag that old soapbox of mine over for a little rant. Unfortunately, this is a familiar one. I think I have it most places I travel to. And before you say it…let me remind you of something…we are in the 21st century! So what is it that’s gotten my dander up? Raised my hackles? Put the hitch in my giddy-up? It’s the wifi situation in and around the hotel. And perhaps I can extend my agitation to most of Malta. I realize they’re an Island. But there are almost ½ a million people living on this island. In this day and age I really believe that wifi should be available EVERYWHERE…and by everywhere, I mean in your hotel room…out by the pool…on the beach…so EVERYWHERE. I mean really…if little ole Saint John can offer up free wifi to any and all in the downtown core, then it can be done. There is wifi in the hotel, but one needs to go to the sitting area in the hotel lobby to use it. Now this sitting area is conveniently located near the small bar area and the big screen tv. Did I mention it is the only tv that gets any decent channels on it? Coincidence? I think not. It is my best guess that the location of said wifi in proximity to said bar is nothing more than a ploy to get people to spend more time in the bar, and therefore more likely to purchase a bevvy…I type as I sit here with an ice cold Coke recently purchased from the hotel bar. So what can I say, said ploy obviously works. And surprisingly, I really can’t complain about the prices in the hotel bar, cause I just had a bag of chips, a Mars bar and a bottle of Coke, (yup, I really consumed all that in the last ½ hour), for under €4. A bargain, I thought. But doesn’t make me one bit happier about having to come down here to use the wifi. I’m still annoyed that I can’t sit in the comfort of my room and enjoy the Internet. I’m totally sated with junk food…but STILL ANNOYED!! 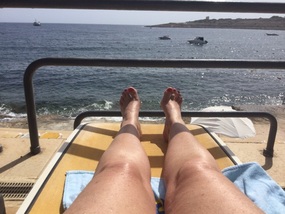 By the pool, by the sea
. Translation, you ask? Well, you know the R&R part, that’s pretty standard. We rested and relaxed. We enjoyed the pool and some pizza, and we toured and casino’d.

We traveled by bus to St Julian’s to try to track down the casino that we went to a few years back. I made a significant haul there the last time we were here, so thought it only prudent to give them a second chance. Unfortunately we were given directions to a casino, alright, just turned out to be a different one than we were looking for. See, if I had internet in my room I would have sussed it all out before departure…but I won’t harp on that any longer. It turned out to not be such a bad thing as I walked out with a little bit more €’s in my pocket than what I went in with. By my calculation, it must have been somewhere between €50 and €70. Not bad for an afternoon’s work. 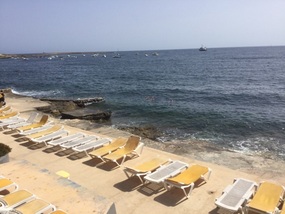 People DO swim in the sea...just not me!
. It’s a nice waterside spot very much like here in Qawra and up the road in Bugibba. There are a lot of quaint little waterside towns…but I guess that’s not really that strange given the fact that we’re on an island!!

One valuable find today was our very own “local”. We scoped it out last night when walking from the bus stop. We couldn’t believe a) how busy it was, and b) how cheap the drinks were. So today, on the way home from Sliema, we stopped in for a drink. A pint and a half pint of STELLA (Artois) cost us UNDER €5. Can’t beat that. I’m sure we’ll be back.

It’s been another fabulous day, weather wise. It’s been hot and sunny each and every day. Not a drop of rain in sight. Can’t beat that!!

Don’t know what is on the schedule for tomorrow. Guess we’ll just wait and see where the wind, and the Malta Transit System takes us!
Other Entries
-

I'm torn on this one. On the one hand I totally get it. If they can have amazing wifi in Nowhere, Spain, population 20, then it should be possible anywhere. On the other hand I sort of miss the days when a holiday was a holiday from everything. And then on the other hand, I enjoy hearing about your trips while they're in progress and I enjoy sharing my travels whilst still on the road. Not that I have 3 hands, but you get where I'm going with this.

Sounds like you guys are enjoying yourselves! That water look rather unsafe for swimming ...is there no Sandy beaches ? Glad you are having luck at the casinos!

Afraid I NEED my connection, Shelley...and Sue...not a sandy beach to be seen so far...maybe tomorrow!