-
One of the keys to a good holiday is flexibility. And no, I don’t mean “your feet behind your ears” type of flexibility. More like the “not locked in to anything” and able to change plans as required, flexibility. The plan today was to go to Gozo. It is a little island off the coast of Malta…and Malta is a little island off the coast of Sicily. Okay, so that makes Gozo a TINY island off the coast of Malta. So, bearing in mind the size of the island, we scheduled accordingly, or so we thought. We had a late start this morning, not getting out of bed till 9:30. We’re on holidays, ya know!! We’re allowed to oversleep once! We treated ourselves to a “full English” at the hotel restaurant. I mean, really, for €5 inclusive of juice AND tea or coffee, ya can’t go wrong. Then it was over to the pool for a dip. After all this, it put us at about noon. We got all dressed and ready and presented ourselves at the front desk to ask about the bus route to the Gozo ferry. The woman looked at us like we had 2 heads and said “You’re going there NOW?”, to which we replied “yes”. Her response was an emphatic “No, no, no. You must get up very early to go there, like 7 am. There is just so much to see that you won’t see it all in an afternoon.” Who knew? We figured we’d zip over, pick a bus route, maybe transfer onto a couple of other lines, and just kind of see a bit of ‘stuff’, and then head back. Apparently NOT. So, our plans have now changed. Fortunately we’re not overbooked. There are a couple of other things that we have on the agenda, but one is closed on Monday’s and the other is already booked for Wednesday. That leaves either Tuesday or Thursday for Gozo and the other for that last thing on our to-do list. So, tomorrow we’ll be setting an alarm to get up and on the road early. I guarantee it won’t be 7am early, but it will definitely not be 9:30 early! 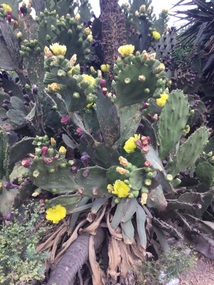 Flowering cacti
. What was there left to do? Well, nothing on our list except, maybe, find the Dragonara Casino that has so far eluded us. It didn’t elude us today. We found it! And although it wasn’t as good to me as it was a few years back, I did manage to win €75, leaving me with more money now than what I left home with!! Gotta love it!! Makes me think a couple of things: 1) it's NOT the undies that are lucky, and 2) I may have to rethink this "I'm done with casinos position I've taken of late.

We stopped in Bugibba on our way home from St Julian’s today and had dinner on a little spot overlooking the sea. Not unique in this place as there’s a restaurant overlooking the water about, oh, every 5 feet. This place was called George’s. We picked it because they had such a good price for cheeseburgers, and both Kier and I had a hankering. How can you go wrong with a €4 cheeseburger served with fries and a bit of salad. Our beers added in made the total cost of our meal just slightly over €12. Now, all I’ve got to say about this is…you wouldn’t go to China and order spaghetti…you wouldn’t go to Texas and order fish…so in this land called Malta where the food is hugely influenced by Italy, perhaps ordering a burger of any kind and expecting it to be like back home, may have been optimistic. I’ve learned that a few things here aren’t like home. For instance, milk has a very different taste; the aforementioned bacon is different; Coke just NEVER tastes as good as home; bread, totally different consistency; and now we can add hamburgers to the list. It’s a lesson learned. My meals from this point on are going to be either Italian or seafood, cause those are the things that are specialities here. Cause you know what they say…”when in Rome…”, and although we’re not IN Rome, we’re pretty darned close!

It’ll be an early night tonight…cause we’ll be up at the crack of oh…well, probably 8am to head to Gozo.
Other Entries
-

Bet you can't wait to find out what the big attractions are on this tiny island!