-
I guess it’s that time again…time for some tour bus etiquette! Technically, it should be “tour train etiquette”, but I don’t think the mode of travel is as important as the issue…but more on that a bit later.

Today we were scheduled to do a free walking tour in Valletta, the capital city of Malta 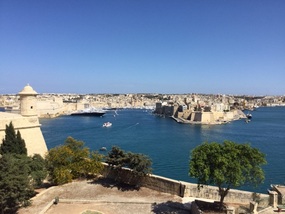 Valletta harbour
. We have been in Valletta before on a port of call during a cruise. And knowing we were going in today for a walking tour, we purposely stayed away till now. With so much to see and do elsewhere, no point in making a second trip. We had a morning dip and the weather was perfect, as it has been every day since our arrival. Rarely a cloud in the sky and always warm, leaning toward hot. It took us a good hour on the bus to get into Valletta. No matter where we go, there always seems to be a logjam somewhere on the route. Today was no exception. We arrive shortly after 1pm and seek out a spot for a bite of lunch. The walking tour is not scheduled till 5pm. A bit late in the day for a walking tour, but perhaps it’s a heat thing. It is 30 degrees today, and inside the walls of Valletta City, it’s stinkin’ hot. Or perhaps the tour guide has a day job and runs this as a side business. Who knows…but none the less, we have more than 3 hours to kill. We find a nice spot with some shaded outside seating and enjoy a lovely pizza and something they label as a “plain salad”, but which I would consider anything BUT plain 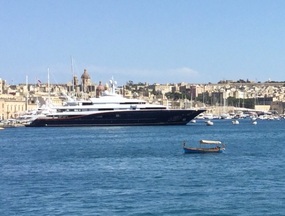 So THAT'S where I left it!
. MY plain salad would consist of some green stuff, maybe some orange stuff, and perhaps a piece or 2 of red stuff…on top of which I would sprinkle the virgin olive oil and balsamic vinegar that is found on EVERY table at EVERY restaurant we’ve been at. The salad is more what I would describe as a “mixed salad”…not very plain at all. There is some green leafy stuff, some purple leafy stuff, some shredded orange stuff, and some chunks of red stuff…just as I expected…but there’s also some cole slaw, some cucumbers…okay, fine with that…then some olives (yech), some pickled onions (double yech), and some pickled cauliflower (triple yech). No worries, I can eat around the icky bits. And the pizza…fab! Lots of fungi, which one would definitely expect on a fungi pizza!

With lunch consumed and appetites and thirsts quenched, off we went for a wee walk about. It seems to be getting hotter by the minute. My arms are getting redder and redder. Kier and I both agree that in this heat, we aren’t likely to last another 2 hours waiting followed up with a 2 hour walking tour 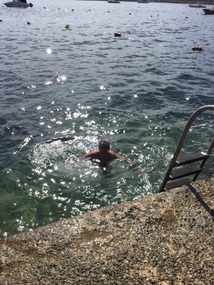 I swam in the COLD Mediterranean Sea today!
. So, we stumble upon another one of those little train tours that we so enjoyed in Mdina and Rabat. Can’t go wrong for the price. Just like the other one, this one costs €5 per person, but this one only has an English commentary. The previous one had the commentary in a couple of languages…well, I don’t see that as a problem. The driver advises that the commentary is in English…so one would expect that if you couldn’t understand English, you wouldn’t buy a ticket. And the commentary is broadcast to the passengers via speakers in each of the 3 train cars, not by headsets as on most bus tours…again, didn’t see this as a problem as the one in Rabat worked well.

On the train we get, in the front row of the third and last car. There is a group of about 6 people in our car that are all traveling together. A few others sprinkled here and there throughout the car. They are mostly all speaking various languages…none of which is English. And then the tour starts…and the various groups in our car continue to speak whatever languages it is they all speak…loudly…right over the narrative coming through the loud speakers. There is a woman and her daughter right behind us, they proceed to get into a loud exchange. What does one do? Well, anyone who has ever watched every Seinfeld episode in existence knows…first you give them the head turn, and then you give them the head turn with the eye roll. After that, what do you do? Well, we sighed a lot, we commented to each other how people don’t know when to shut up. All lost on those who DON’T SPEAK ENGLISH! Which totally prompts me to ask…who goes on a tour when either a) you don’t understand the language it is being given in; or b) you have no interest in the actual “tour” part of the train tour? Folks!!!!! It’s NOT A REAL TRAIN!!!! It’s on WHEELS, FFS!!! Kier and I could see the 2 cars ahead of us…no one, NOT A SOUL, was talking during the commentary. They all sat quietly and listened. We, apparently, were in the PARTY CAR! We…we of poor hearing and NO patience...just about LOST IT! I almost turned around and told everyone to shut the f#*k up! I was paying for this tour and NOT getting my money’s worth. But then I realized…they wouldn’t understand me anyway!! And if they did, they wouldn’t have cared less!!!

So all you tour bus participants…when the narrative on your tour is being broadcast throughout the bus, or train, in a language that you don’t understand…perhaps you should have rethought your choice of tours in the first place! But if you’re stuck in that situation, keep your eyes open and your mouth shut. Let the other paying customers who DO speak the language at least HEAR the narrative. It’s a true test to the traveling ignorant that one has to be told about common courtesy!

Oh, and BTW, I sent an email to the tour organizer that we wouldn’t be making the walking tour. It IS the courteous thing to do, after all!!!
Other Entries
-

Too funny! There is nothing in life that does not relate to a Seinfeld episode!