-
I would say that Fay and I had a totally seamless train trip from Glasgow into London, but that would only be half true. Our ride from Glasgow to Edinburgh was definitely seamless. The Virgin Train portion had a bit of a wrinkle. And the wrinkle was exacerbated by inflexible staff. I could see if Fay and I looked like we were a part of the seedy underbelly of society. Even if we just looked shifty and untrustworthy. Or at the very least, if we were from the United Kingdom and familiar with the intricacies of train travel and their ticketing system. But none of that is true. We are just two tourists from Canada, going about our holiday, minding our own business. We're not going to dwell on the low part of the day, however, suffice it to say an appeal letter will be sent to Virgin upon our return home and a valuable lesson was learned by the both of us. 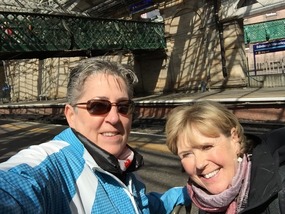 Virgin and their confusing ticket system
I am pleased to say that we're batting two for two on hotels as the Days Inn Hyde Park is every bit as nice as the Hampton Inn was in Glasgow. It's a bit smaller, of course, as most rooms in London are, but very clean and the staff are very accommodating. When I booked it through a third party website, it was somewhat cheaper to opt for no breakfast. I didn't think it was worth paying an extra $100 C for 5 breakfasts for us. I figured we could eat in a restaurant for less than that. When we checked in we learned that we get breakfast anyway. Everyone gets breakfast at a Days Inn!
Tonight we were off to the theatre and we opted to walk. It was very crowded on Oxford and Regent Streets which made the walk even longer. It took us about an hour and a quarter to find the theatre. We just had time to grab an appey and a drink before heading back to the theatre. Fay and I did our best Waldorf and Statler impression. You remember them from the Muppet Show? The guys who sit up in the box seats? We really treated ourselves and, for the first time ever in London, we enjoyed the sense of superiority that comes with sitting up above the rest of the common folk. The show was 42nd Street and was a very lively production with lots of tap dancing and bright costumes.

The same box as ours on the other side
Tomorrow we have a more relaxed scheduled. It may include some shopping!!
Other Entries
-

Thinking of you ,is the weather nice ? Hope so I just watched the movie 42nd Street ! Lots of rain over here ! Have fun xox

You'll have to fill me in on the train snafu when you get back. I'm guessing the "play dumb" and "puppy dog eyes" that you used on our trip didn't work in Scotland!

The weather has been just FABULOUS, Gael. No complaints there. And Shelley, I will fill you in when I get home, but Fay taught me everything I know about 'puppy dog eyes'. (I've got the 'play dumb' part down almost naturally.). We gave buddy a double dose of puppy dog eyes to no avail. Me thinks he was recently shafted by wife/girlfriend...

Their train travel is still better than ours. Looking forward to your next blog, try to stay out of trouble.