-
Today was Windsor day. Not Windsor Castle day, cause we've both been before. We had tickets to the evening's 'race meeting' at the Royal Windsor. Off we went early this morning to enjoy some of the sights in and around that lovely little town. We had no trouble putting in our time until the track opened at 3:50 pm.
Some of the best holiday memories are those that aren't planned. When we cleared the train station in Windsor and got up to High Street we found both sides of the street lined with people. We asked what was going on and it was the changing of the guard at Windsor Castle. Well, it's FREE, it's in 5 minutes, we've got front row centre standing space, and neither of us had seen it before. In actuality, we weren't going to see the ACTUAL changing of the guard, but only the march past of the band and the guards enroute to the Castle. But hey, enough for me! 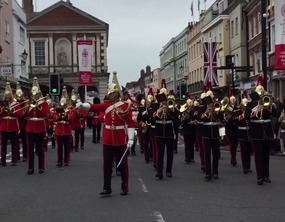 Changing of the Guard at Windsor Castle
Upon recommendation by a local, we took a nice stroll to Eton College. This is the college where all the Royals go and pretty much the children of anyone who's anyone in England. It was really neat to see all the students entering the college sporting their very classy morning coats...which to me looked a lot like a tuxedo jacket with tails, and their robes which looked like garb that our lawyers wear in Supreme Court. We weren't allowed inside the college proper, but we did walk the perimeter. 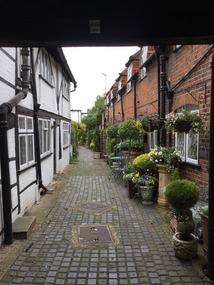 A picturesque alleyway in Eton

Another school with an interesting curriculum
We made our way to the races late this afternoon by water taxi. The race card had a mere 6 dashes and they were 1/2 hour apart, so the first one was at 5:50pm and the last one at 8:20pm. Fay and I decided that we'd increase our odds by deciding to split our winnings. This is what is called 'The Marjorie Principle' and is based on the age old theory that when 2 people play bingo and decide to split their winnings, you have twice the opportunity to win. Sometimes it works, and sometimes it doesn't. We were happy to give it a go. What with that and the fact that I had my lucky undies on...we couldn't lose...but we did. Of course, we were far from the last of the big time spenders at £2 per bet...and with 6 dashes, we were looking at the huge sum of £12 each invested in this little adventure. And when considering the exchange rate of those £ to $, it's a good thing.

Some local colour
The Windsor Race Course is chalk a block full of a broad range of people from all different walks of life. You have the young bucks who travel in packs with their doe's..and these doe's are the ones who have such Botox in their lips that they look like a tragic example of medical malpractice. You have the after work gang and you have those that come from neighbouring towns and 'shires' on a semi-regular basis. But you also have the fellow who we'll just call 'Mr Branson'. We nicknamed him that not because he was a very regular attendee at the track, although we're certain that he is. Also not because he's 90 and that likely makes him OLD enough to be Richard Branson's father...but because he seems to be loaded. And he was even MORE loaded when he left tonight. Now, there are 2 ways to make bets at these English races. You can place your bets with the 'totes' which is what we're used to doing in Canada. Or you can place them with a bookmaker, or a 'book' as they call them over here. Our buddy Mr. Branson is a regular with a partcular bookie named Mr. King. Branson was placing bets of £100 a pop on a horse to win, and he placed one such bet on each and every race. He picked right at least 3 times while we were there. We calculated his winnings at £1800, subtract the £600 for the bets he place, and he went home £1200 in the black. Us...well, we took his lead on 3 of the races and...you guess it...they were the 3 he didn't win.

Fay and our Mr. Branson

Mr. Branson's Bling
Regardless of not winning, we had an interesting evening. Met some interesting people. And experienced our first every flat track race meeting. And the undies...they're gonna be burned for sure!!!
Other Entries
-

I'm thinking Mr Branson thinks he won big...and not just on the races!

Actually, our Mr Branson told us that we made his night for him. Especially when I pinned a little Mountie pin on his coat lapel. He was going to tell all his other girlfriends about us. And me thinks there are MANY!! I mean really, you do the math...90 years old, loaded by all accounts, bad eyesight, worse hearing, 1 food on a banana peel. That math, to me, adds up to a ton of gold diggers!!!

Rings on his fingers, were there bells on his toes. He did hit the jackpot. Can't wait to see what's on for tomorrow!