-
I truly love staying in the Sussex Gardens area around the Paddington train and tube station. And days like today, make it clear just why. We headed out early to walk to Kensington Palace to take in the new Princess Diana exhibit which commemorates the 20th anniversary of her death. It was about a 1/2 hour walk, but a lovely walk through Hyde Park. The Palace opens at 10 am, and because their website indicated that they were sold out this entire week, I thought it best we get there as early as possible to avoid too much of a crowd. We arrived and found no line up to speak of. Maybe half a dozen people in line to pick up their pre-purchased tickets. But wait...there were 2 women in front of me BUYING tickets. Hmmm, apparently the Palace has an entirely different definition of 'sold out' than do I! Oh well, not my circus, not my monkeys. We really skimmed through the King's and Queen's Apartments to get to the Diana exhibit. It was 5 rooms of her fashions, totaling 25 different outfits on display. Some were originals straight from the royal collection. Some were on loan from people that had purchased them in auctions. And at least one was a copy. They had a nice slide presentation as well, highlighting her philanthropic activies. You could hang around and look or circle the entire Palace tour again and again. There was no time limit on your stay. In fact, we circled around the parts we skimmed a second time to make certain we didn't miss anything. When we reached the entrance of the Diana exhibit, there was a HUGE line. The timing gods were on our side today. What did sort of turn me off about the whole thing was this...the gift shop. In my humble opinion, Diana served as a 'cash cow' for the Royals, and now in death, she continues to serve as one. Cause when you offer a scarf with a Diana silhouette on it for the grand price of £75, you're looking to cash in. And THAT was one of the cheaper offerings! I mean REALLY! Had they designed some small token souvenir to represent the exhibition, I'm certain EVERYONE who went would have bought one. As it is, that price level of souvenir only appeals to a small (read rich) clientele. 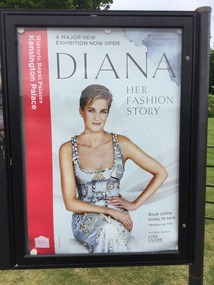 Twenty-five in total on display

Even the wallpaper is Diana!

The gardens done all in white in memory of Diana

A cool view of the palace
From there, Fay and I walked on to Harrod's. Fay wanted to check out the Harrod's Gift Shop. Again, another 1/2 hour walk along the side of Hyde Park. For those unenlightened amongst you, you may not be aware that the Fayed's sold Harrod's a few years ago. It is now owned by some Qatari's. Some say the ambiance has changed in the store. If by 'ambiance' they mean that their plastic tote bags displaying the various Harrod's patterns and logo's now run for the ridiculous price of £25, then I agree. The 'ambiance' downright STINKS!!

Me and the Harrod's Bears
We left Harrod's and returned through Hyde Park...so we've seen just about ALL of the Park today. It was another 1/2 hour walk for me to return to the hotel and for Fay to hit her favourite shopping area Oxford/Regent. So that explains it, why I love the Sussex Gardens area so much. It's basically a 1/2 walk to ANYWHERE!!
Tonight we were off to a comedy show called Pam Ann. It was a one woman show and all about air travel. In light of my recent experiences with airlines, I figured it couldn't lose. Pam was very funny, but the gratuitous use of the Fbomb was so overdone. She could have been just as funny by cutting back the cursing by about 80%. We had excellent seats. Centre stage and 3 rows back. Turns out they were a little too close, as Fay and I soon became 'part of the show'. On 2 occasions she referred to us as 'the lesbians'...not that there's anything wrong with that!!

Great seats
I've got a few more photos for today than I normally have...but I just couldn't decide what to leave out. Then I decided 'hey, I'm the boss of this blog...have at 'er'!! Enjoy!!
Other Entries
-

Wow a little commercialized but Diana was loved worldwide. Would she appreciate this kind of display, perhaps not, but it is an honor if you keep it in perspective. I'm jealous, wish I were there. You go girls! Love Elaine

Your blogs are getting me very very excited. Our countdown is officially on.What is the weather like?

Weather was beautiful yesterday, Val. But Monday in Windsor was downright cold!