-
What a difference a day makes. After all the bumps and stumbles of yesterday, today was perfection. Victoria is a beautiful place. Somewhere I could actually consider living…if someone GAVE me a house…and if I had any reason at all to relocate way out on this left coast. You know, I was once told by some colleagues in Ontario that the only people that live in Victoria are senior citizens and relocated witnesses. So I didn’t have any idea of what to expect from this Island city. And since I was told that some 23 years ago, those groups could now be one and the same. But really, all that aside, what a great town.

The weather here today was gorgeous 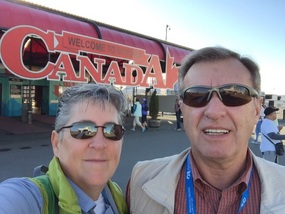 jpg
. Clear skies, beautiful sunshine, and slightly cool temps. Ideal for what we had planned. We did a couple of self guided walking tours…which is to say, we followed a map I printed from the Internet which gave us 1 route to walk INTO city centre and a different routing back to the ship. It was lovely walking along the water and then coming home through the Heritage Home District.

Now all that perfection aside…I just have ONE thing to say with regard to moving about the ship. I have come to accept…okay, accept is a strong word…I have come to TOLERATE the elderly and the slow moving who inevitably get in front of me in the buffet line. I am trying to develop a more “zen” approach to it. But perhaps I could just make one recommendation?? It’s very wee, small. Simple really. When you’re hobbling along at a snail’s gallop through a somewhat narrow passage way, MUST YOU TODDLE ALONG IN THE CENTRE?? Could you not just pick a side? Left or right, I don’t care which. And I promise I won’t interpret it as a sign of your political leanings 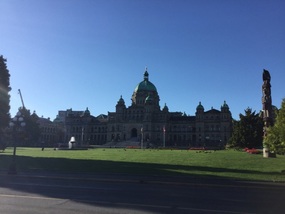 Very cool Legislative buildings
. I JUST WANT TO GET BY YOU.

So here we are at day 2. I had some lofty goals for weight loss in the weeks leading up to departure. And dang nabbit, I was pretty darn CLOSE to achieving them. Until I wasn’t. But suffice it to say I have just today come up with the perfect diet strategy for when I return home. And really, it’s not even a diet, so much as a lifestyle choice. I guarantee it’s gonna blow the ole WW, Jenny, and all those other costly programs out of the water. It’s quite simple really. I actually discovered it just today at lunch…in my cabin…as I consumed a very tasty cheeseburger…in front of the mirror at the desk. And that’s the key bit there…the mirror…it’s where I noticed that I seem to be developing more chins than a Chinese phone book…which on this particular ship is really saying something!! You want to be put off your burger really fast?? Just watch how the wattle waggles with every bite. I’m going to start propping up a mirror in front of me for every meal 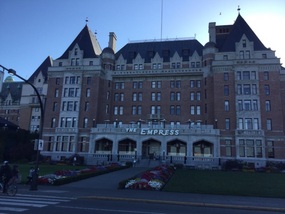 And when speaking of goals, one of the things I wanted to do on this cruise was to try new things. The daily agenda is chock a block full of things that I see from cruise to cruise but never experience. Like yesterday…we participated in the $1000 Treasure Hunt. We didn’t win anything, but we gave it a go. Today, I attended a class in Origami. Yup, the art of folding paper into shapes that may, or may not resemble a swan, a penguin and a piano. I thought the process would do wonders in advancing that “zen” thing I’m working on.

Tomorrow is a sea day…should be lots of opportunity for new things!
Other Entries
-

Welcome to my world! And when you're in Victoria you're supposed to eat Rogers Chocolates, not Purdys!

No can do on the Rogers chocolates...my heart belongs to Purdy's!

Can one geocache while at sea??

I chuckle once again at your references to old folks! One day, that will be you and Keir moving at a snails pace! Keep blogging,I look forward to it every day! Have fun!

No, Kim, one cannot geocache at sea...but I could have geocached in port...if I hadn't forgot to pack my GPS :(

And Susan, when Kier and I reach "shuffling age", our trips will be limited to the grocery store...wide aisles, no blocking!