-
A sea day today, and what do you see on a sea day? You see the sea. Say that 5 times fast! Given our position traveling down the west coast toward San Francisco, I figured if there was ever a time to see a whale, now would be the time. The first day leaving Vancouver we saw a seal…far cry from a whale! Then yesterday after leaving Victoria we saw 2 water spouts from what we assume were whales, but no confirmation was made. I also saw a black back of some sort far off in the distance, but again, just a whale assumption. I figured with a full day at sea, this would be when it would happen. Apparently all the whales are lazy today. Maybe the whale world is a lot like the human world. You know, after working a long hard week, the last thing you feel like doing on a Friday afternoon is putting on a show. Damn lazy whales!

In keeping with my “cruise of firsts”, I had a couple today 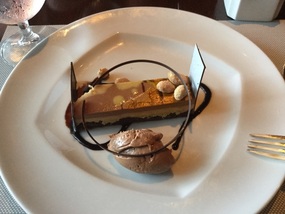 Chocolate Peanut Butter Bar served by Gru
. I actually LOST at Speed Sudoku…and I don’t mean by a minute or 2. I barely got started when some old geezer shouts “I’m done”. And the second place finisher was the sneaky old girl who asked upon arrival at the venue “You don’t have to be real good to play, do you?”. All meek, mild and innocent like, complete with batting eyelashes and all. Damn ringers!

My second first of the day was when I joined a bridge game. It’s the first time I’ve attempted bridge on a cruise ship. It was also the first time I’ve suffered a bridge related injury. What is a bridge related injury, you ask? Well, it’s when you knock over your bidding box onto the floor, lean over the arm of the chair to pick it up and crack a rib. But as the old saying goes…it only hurts when I laugh. Okay, it hurts a little when I cough…oh, and when I stretch…okay, and maybe when I change positions in bed. Damn bridge! Damn bidding boxes!! Damn ribs!!!

And tonight we went to the speciality restaurant, the Bayou Café. It was the first time I have ever been served by a cartoon character. Okay, it wasn’t REALLY Gru from Despicable Me, but there is not doubt he was the person who inspired the actual character! He looked like him, and he talked like him. He reminded me so much of Gru that I wouldn’t have been at all surprise to have peeked into the kitchen to find the Minions preparing my lobster!!

Well, tomorrow is San Francisco! Bring it!!
Other Entries
-

I'll bet you were positively giddy when you came up with that title!

You are definitely living the high life. Love your blogs. Enjoy.

Hi Travelers. we read your mail every day.Sounds like you are having a good time except for the old people getting in your way.EVERYONE, is well here. Love You. Mom.