What a difference a day makes

-
Yet another sea day today and I’m running out of new things to try. Fortunately, today was Downton Abbey trivia day. Now let me tell you right off the bat, I don’t ordinarily do trivia. Why, you ask? Well, because everyone gets into teams for this, and when it comes to trivia, there’s an ‘I’ in my team. Okay, the real reason is I don’t like strangers…and sometimes ‘people’ in general. I don’t like the whole concept of “playing” with people I don’t know and having to strong arm them into the answer that I KNOW is right, when they think something else is. But for Downton Abbey, I would make the effort/sacrifice. I wasn’t going to miss it. Hell, I even planned to play on my own team…the team of 1! Interestingly enough I sat next to 2 women who ALSO wanted to play solo, so it worked out well. I do have to report, however, that had I teamed up with the 2 ladies beside me, I would have been sitting here a winner. The lady beside me was a winner with 18/20 right, and I, sadly, only had 17/20. I am not overly upset, though, cause the prize was the same thing I already won at Speed Sudoku…and how many neck pouches to hold your cruise card does a person really need?

After 5 cool, bordering on cold days, we’ve finally made our way to the coast of Mexico and the temperatures have totally changed 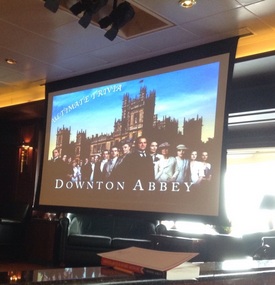 jpg
. Tonight is extremely hot and humid which will make for a very sticky day tomorrow in Cabo San Lucas.

A very relaxing day, all in all, spent swimming, hot tubbing, reading, drinking and, of course, eating. The word is that you gain an average of 1 lb per day on a cruise…after 6 days I figure I’m right on track!!

I do try to get my walk in every day though. But it was a tough walk tonight around the Promenade Deck as with the warm temps has come some rougher seas. Although the swells aren’t huge, this is a smaller ship than we’re used to, so even with a midship cabin, we’re still feeling the ‘motion of the ocean’. I don’t mind, though, cause it will just lull us to sleep. And thankfully, I have my sea legs!!

Till tomorrow!
Other Entries
-