Beware of the '2fer'

-
It’s no secret that Kier and I aren’t huge fans of Mexico. All of it. It stems back to a holiday we took to Manzanillo many, many years ago…like 16 or so. You know how they always tell you when you go to Mexico “don’t drink the water”? Well, we drank the water. Totally our own fault. Okay, okay, totally MY fault. I was the one who said “hey, it’s a Club Med. They filter the water here.” Guess what…they don’t! Three days of vomiting from every orifice of my body kind of sticks with you…for many, many years. But ‘barf fest’ aside, we really don’t like traveling to Mexico cause we think you’re just 1 visit away from being a statistic. Today’s port of call was none other than…Cabo San Lucas, Mexico. Did we get off the ship? After 2 sea days, you’re damn right we did. Did we like it? Not so much. Would we return again? Not likely.

But before I get to the details, I just have to fill you in on our day BEFORE going ashore 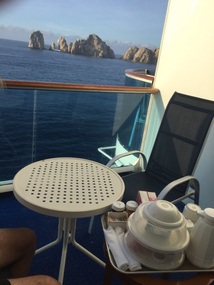 Breakfast with a view of El Arco
. We started this morning with a lovely breakfast on our balcony. Such a great way to start the day. Especially when our balcony had a beautiful view of the #1 top attraction in Cabo, El Arco. The Arch, as it is known in English, is a huge rock formation and, although we’ve seen better in Gozo, Malta and even back home in good ole NB, it was a sight to see. Especially from the comfort of our own balcony. It was a tender port today, meaning we anchor out in the harbour and travel in to shore by lifeboat tenders. To describe the water as a bit ‘choppy’ would be an understatement. And we were anchored far enough out that it was even MORE choppy. I have seen calmer waters than this and have experienced cancellation of the port because it was unsafe for the tenders. They generally put a bulletin in the daily on board newspaper that people with mobility issues may have difficulty with the tenders. Un huh, maybe should have put that in for today. I found it dicey boarding the tender, and I’m fairly able bodied. Some of these old codgers…downright scary! But who should you blame, really? The ship’s crew for letting them go, or themselves for having the poor judgement to think it wasn’t difficult? When the tender is bobbing up and down like a carnival ride, and you have to time your jump from the ship to the tender at just the right time…well, you can only imagine!

Oh, and did I mention that it’s hot here in Cabo? And I don’t just mean hot…I mean STINKIN’ HOT! So we make it to the dock unscathed and head out to wander about the downtown area 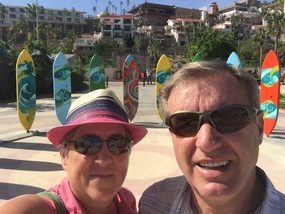 Cabo San Lucas
. The only thing I want to do before returning to the ship is stop in for a drink and use some free wifi. Kier likes to check out the jewellery stores, and I must say, it really throws the store clerks when we enter a jewellery store and I go sit on the couches and Kier wanders the aisles. They are more used to the reverse happening.

Like almost every Caribbean island we’ve ever been to, as you walk around the town there is always someone vying for your attention, trying to sell a tour, a timeshare, or just get you into their store. It becomes annoying after awhile. And here they are particularly persistent in trying to get you into their bars. The ole ‘2fer’ is fairly commonplace here. We happen upon a bar with just such a deal at just about the time we’re looking to take a break from the extreme heat. In we go and order up 2 Pina Colada’s. Kier takes out a $5 US bill expecting that to more than cover the cost of 1 drink…cause the 2nd is free….RIGHT!! The bill comes and it’s 9 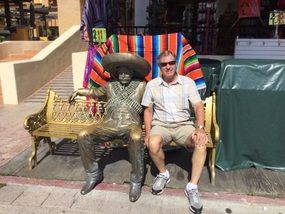 Kier makes a friend
.28. Okay, we think…must be Pesos. I have no idea how the Mexican Peso compares…but it can’t be dollars….RIGHT!! Wrong! Apparently 1 drink is over $9 US. Kier is NOT happy and decides to debate the issue with the wait staff. Needless to say, he gets nowhere. But lesson learned…when you’re offered the ole ‘2fer’ deal, might be wise to ask how much 1 costs!!

Although many of the clerks in most of the stores we stopped in were incensed that we only had 1 stop in Mexico before making our way to Nicaragua, we, on the other hand…happy!

Tomorrow is the first of 3 sea days. More R&R, movies, sudoku and ‘fightin’ with the oldies’. Hey…isn’t that the name of one of Richard Simmons exercise videos????
Other Entries
-