-
We seldom book excursions through the cruise ship. When we do, it’s something that is either too difficult to book on our own or is no cheaper to do it that way. Our ziplining today is something that wasn’t even offered on the ship. The company said they would pick us up and return us to the ship after we were finished. The transportation plus 16 different lines of ziplining all for $30 US. It can’t be beat. This is our third time ziplining. The first was in Catalina Island, the second St. Lucia and now here in San Juan del Sur. And I can assure you, the others were a fraction of the lines and 3 times the price.

Although late arriving ashore due to an incredibly slow tendering process (thankfully our last tender port), we were pleasantly surprised to find our ride awaiting us 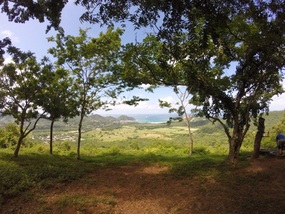 The view from the top
. But then, we were the only game in town…no one else on the ship was aware/interested in ziplining. Maybe there are a bunch of people on location awaiting our arrival to start. Or maybe they’ve gone ahead and started and we’ll play catch up. Wrong and wrong. We arrived at what can only described as a rinky dink, ramshackled building. Hmmm…are these folks on the up and up? And then I saw the very large and heartwarming sign posted at the front of the building. The TripAdvisor Award for being a highly recommended attraction. The upside was there was lots of equipment to pick from and lots of staff to help us…cause we WERE the only game in town. Gotta love a private tour!! Up the mountain we went in the back of a safari-type vehicle. It was a dirt road that looked like it had been washed out time and again. Was it rough!! We were jostled and thrown around like socks in a tumble dryer. I figured if the ride up the mountain didn’t kill me, then the trip down should be a breeze.

The first 4 lines were very calm 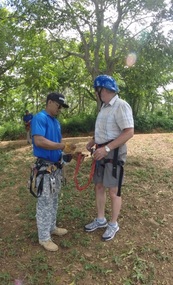 All kitted out
. Ulysses and Marbin called them our ‘practice lines’. Kier was doing great in the warm up…but I was going to have to work on my braking. Didn't figure it would be too big a problem when the lines got longer…shouldn’t really need to brake too much. Wrong again! Some of these lines are the fastest I’ve been on yet. And the last thing I wanted was to break something by hitting a tree at warp speed. And did I mention the humidity?? As that age old saying goes “it’s not the heat, it’s the humidity”. I finally have a full grasp on what that means. Even though the temps were forecasted to be around 30 C, the humidex was way up there…around 100 F. And with the threat of Zika Virus, the ship recommended everyone wear long sleeves and long pants ashore. The only long sleeve shirt I had was my compression shirt. Note to self…compression shirts hold IN the heat…they don’t breathe. And that other old saying “too much of a good thing”…well, after the first 10-12 lines, I was starting to think that this bargain of a deal was definitely too much. It started with my right bicep…my braking arm. It very quickly got tired and sore. By the last few lines Ulysses had to ‘taxi’ me down the lines as I didn’t have enough strength left in my arm to brake at all. By the time we REACHED bottom, I had just about HIT bottom. My face was 50 shades of burgundy, I couldn’t lift my arms, and I was bordering on heat frustration. After some rest and fluid intake I returned to my normal colour, I got over the heat, but as far as my arm goes…I may have to become let handed. The right one is just like a limp noodle. It won’t do anything I want it to. And in spite of it all, we had a blast! And that dilemma I was struggling with before I left home on vacation?? To join Good Life or not to join? Well, I guess this was a sign. I definitely need to get back in shape!

Tomorrow’s excursion in Costa Rica will be much more relaxing. We’re doing a tree top walk and visiting a hummingbird garden. Surely I can’t hurt myself there…unless one of those little pointy beaked bastards tries to poke my eye out!!!
Other Entries
-