There's a reason they call it a RAINforest

-
Is it stupidity? Is it bravado? What is it, exactly, I can’t be sure. But we booked a ship’s excursion several weeks ago. It was called ‘A Walk in the Clouds’. It is described as a hike over rough terrain through the rainforest crossing 4 suspension bridges plus a visit to a butterfly garden and a hummingbird garden. The excursion was rated as ‘strenuous’. So what is it that would lead a person to think that if they had mobility issues, then THIS would be the excursion for them? What would make a person think that a strenuous hike through a rainforest would be an excursion that you should wear flip flops to? And when your bus arrives at San Luis Park where the excursion begins, and the 2 guides say they are going to split the group into 2. They are going to have 1 group that is the ‘fast’ group, and one group is the group with mobility issues, or those that may be a bit slower. So what makes 2/3 of the group put themselves in the ‘fast’ group? The routing is going to be the same only they both traverse the route in opposite directions. One direction is easier than the other. The slower group will traverse a steep downward grade, while the faster group will face the same grade, only it will be all uphill. 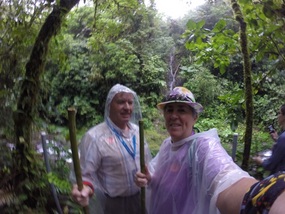 jpg
. It was quite amazing how many people I would have sent to the slow group who placed themselves in the fast group. Fortunately, the group that people placed themselves in made little difference as the pace of the hike was pretty much slow all around. There were stops every 4 or 5 minutes to discuss the flora and fauna of the rainforest. Even Mrs. Flip Flops completed the hike, although after the heavy rain and thunder that we dealt with throughout, she may have wished she’d rethought her choice of footwear.

All in all, it was an interesting day, albeit with a largely inflated pricetag. I try not to think what we would have paid for the same tour had we booked it direct with the company vs through the cruise ship…but sometimes you just have to pay that little extra for convenience.
Other Entries
-