There's a hole in my bucket...

-
I’m not really a ‘bucket list’ kind of person, but if I were, I could now strike ‘traverse the Panama Canal’ off it. It was a full day which started when the alarm sounded at 6am. Do they not realize that I’m on HOLIDAY!! But we were told we had to see the Bridge of the Americas which we pass under at the entrance to the Canal. Far be it for us to MISS something that everyone would be talking about for days after. So, up we got. We never cleared the breakwater near the Atlantic Ocean end until around 4:30 pm.

Now, how would I describe this full day of transiting the Canal? Hmmm…not really underwhelming, but neither was it the absolute highlight of the trip…which I’m guessing it was supposed to be 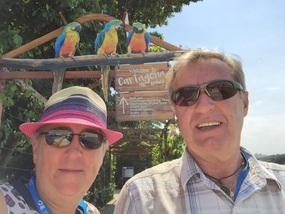 Welcome to Cartagena!
. So something in between. Interesting…yes. Memorable…definitely. Worthwhile…for sure. And definitely not disappointing. Just not the pinnacle that I had hoped for.

Today we arrived in Cartagena, Columbia. For some reason I had imagined a very rural spot, quite small and village-like. I couldn’t have been more wrong. The population here is well over 1 million people. And the temperatures? In 2 words…stinkin’ effin’ hot! Oops, guess that’s 2 ½ words!! It was so hot it made Nicaragua seem like it was downright chilly!

It was a short stay here in Cartagena...a mere 5 hours. It was too far to walk to the Old City and dealing with the obtuse taxi drivers in this heat was just too much, so we opted to stay close to the cruise terminal. Of all the cruise ports we’ve been in, I must say, this one was most impressive. They had an aviary on site which was free. You could really mingle with all the different types of birds 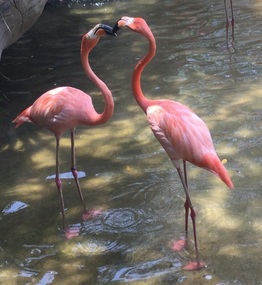 jpg
. You could get up close and personal, but in the vein of “if you break it, you’ve bought it”, if you suffer any injuries at the hands, or should I say beaks, of the birds, you’re on your own. But you’re free to take as many photos as you want, and there’s no one with their hand out expecting a tip! Thoroughly enjoyable way to spend some time.

When we returned to the ship we got the bad news. A tropical storm in and around the Aruba area has caused an itinerary change. Aruba is being cancelled and we’ll spend the day at sea. On Friday, however, we will spend the day in Georgetown, Grand Cayman. I’m thinking this is a good thing. We’ve been to Aruba before. We’ll not be missing a whole lot. But Grand Cayman…I haven’t been for 30 years.

We’re expecting some rough seas tonight…so as the ole’ saying goes “if the boat is a rockin’, don’t come a knockin’!
Other Entries
-