-
What a blast we had tonight on a tour that's called The Ride. You sit on a bus, but the seats aren't like a traditional bus. They run in three rows from front to back so everyone is sitting and looking out the side of the bus, which is a wall of windows. There are 2 hosts/hostesses on the bus who guide the tour and provide entertainment and information. It is a very interactive tour, so if you don't like to be singled out, asked what your name is, where you're from, etc., then perhaps this isn't the tour for you. There are even people out on the sidewalks who get into the act. In fact, a rapper in Hell's Kitchen actually incorporated mine and Patti's names into his rap. (Be wary of staff who strike up a conversation with you while waiting to board the bus and ask you your name!) It was a great 75 minute tour, although, if you are not doing any other tours of the city, you won't go too far afield on this tour, in fact, it seemed that we circled the same block over and over again. No Radio City Music Hall, no Rockefeller Center, no Macy's or Bloomies. What it lacked in variety it certainly made up for humour and scored big on "cuteness factor". I would certainly recommend it, but the better value would be to get a groupon coupon to reduce the price abit. Oh, and a tip...if you want to sit in the front row closest to the glass windows...be the last to arrive...they fill the seating starting in the back row of the bus, filling the front row last.

We're back in our room now, and what a beautiful room it is

jpg
. We look out on Time's Square from 22 stories up. We see the M&M store, the Hershey store, and several theatres.

Tomorrow, the Rockettes and Billy Crystal. Stay tuned...
Other Entries
- 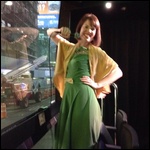 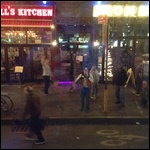 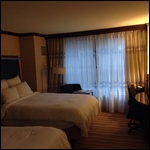 Great Pictures. Makes me so excited to go. I didn't have much luck getting the group interested so I was so happy to hear all about it.