It IS a small world after all!!

-
Something that happened today has left Patti and I scratching our heads. If we had tried to arrange this, it would have been difficult to pull off, but...well, it is a small world....after all. It all started back in the Philadelphia airport. We spotted someone in the boarding lounge, and we both said..."hmmm, is that someone we should know? Someone famous. An athlete maybe?" After hearing the story of how Sean Penn destroyed someone's cellphone in a California bar, I decided discretion was the better part of valour. I snuck a photo of this fellow...perhaps some of you recognize him? Oh, and just for general information...he sat in coach! Oh, and he had HUGE guns!!! And by guns, I don't mean the shootin' kind!! Anyway, we arrived at LaGuardia and we went our way, he went his. End of....

Today, we are wondering around 7th Avenue, on our way to Macy's, and right around 39th street, ish, who do we run into? You guessed it 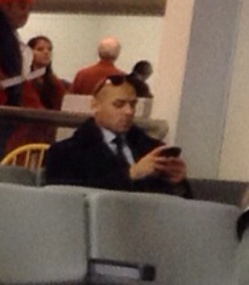 Who IS that mystery man?
...Mr. Mystery Man from the airport. I tried, yet again, to get a discreet photo of our unknown friend...but alas...I wasn't quick enough and he turned down a side street. Who would have thought...in this wee small world of ours that we would cross paths with the same fellow twice...in 2 days...in New York City!!! Yet I can't win the lottery...go figure! Okay Kier and Blair...did you guys get together and hire surveillance??

What a day, what a day. We started out by finding a real gem of a local diner for a great breakfast. We weren't keen on a) spending $12 for toast in the hotel restaurant, and b) walking 12 miles to pay $2 for toast. Thanks to Google (it is becoming our new favourite word here in NYC...whenever we want to find out something...we just look at one another and say "google-it") we found the Evergreen Restaurant. And the best thing was, it was less than 200 steps from our hotel. We had 2 eggs, hash browns, toast, and tea or coffee for $5.95. Lord love a duck, you can't beat that!

After breakfast we were off to Radio City Music Hall for the Christmas Spectacular starring the Rockettes. In one word...it was AMAZING! No one could leave that performance without being in the mood for the holidays. It's just a shame those girls weren't a little taller, thinner and more coordinated!!! ;)

Right around the corner from Radio City is the "Magnolia Bakery", made famous by Sex in the City 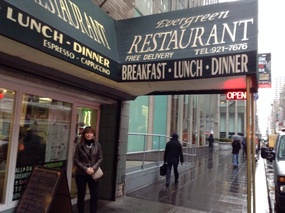 A gem!
. We purchased a couple of very decadent cupcakes which were huge. Oh wait...they're not cupcakes...they're mini cakes. And they look fabulous!! Mine is Red Velvet, and Patti opted for the Chocolate Cheesecake. Exercising great restraint, we dropped our deserts off at our hotel to save for later. We then carried on to lunch at the Shake Shack. Patti advised that this place achieved its notoriety from being seen in The Devil Wears Prada. It's quite obvious I'm on holiday because I did something today I would NEVER do at home...I waited in line to get into a restaurant. But let me tell you...it was well worth the wait. The burgers were excellent. The fries, well, they did compliment the excellent burgers, but were nothing spectacular by themselves. Now, the downside of this great restaurant is the seating. It is very small, and very crowded. To be on the safe side, we ordered our food "to go" in case we couldn't find a table. We did in the end...but not a very fun process!

After lunch we were off to do some shopping at Macy's and the holiday outdoor market at Bryant Park. We also picked up some tickets to a Saturday matinee of Kinky Boots. Tonight...we're off to see Billy Crystal...but not until we've finished our cakes. Patti says we're adults now, so it's okay to have desert for supper!!! Let me tell you....they TASTE even better than they look!!!
Other Entries
- 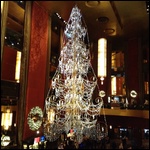 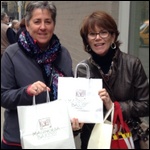 You sure are doing it all. It sure beats me how you can get so much in on so little time. But, that's my girl! xoxo

If I could only get this much accomplished when working around the house!