The plan is not to plan

-
Today we kept our commitments to a minimum. Other than our matinee tickets to see Kinky Boots, we left the rest of the day wide open. Sometimes a little less structure leads to new and exciting things. We did return to the Evergreen for breakfast because...well, why wouldn't you when you can get a really good breakfast for an even better price? One thing we did learn, however, was that the Evergreen has a slightly different weekend menu. No combo specials like they have during the week. Don't fret, though, the prices weren't that much different. The same breakfast I paid $5.95 for yesterday, I only paid $6.25 for today. No big whoop, as they say! 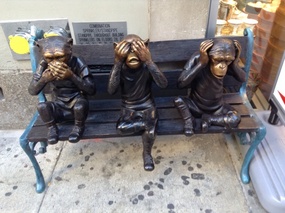 Aren't they cute!!
description
...not called Station, because trains start and stop here, ie Terminal, and don't travel through like in a Station. Thanks Julie, for that little tidbit that we learned on "The Ride" the other night. We opted to go check it out cause Billy Crystal talked last night about going there as a child to look at the constellation's depicted on the ceiling. I had been there years ago, but didn't have any recollection of seeing stars on the ceiling. Enroute to Grand Central we took a pit stop at Barnes & Noble Booksellers. It was a huge store and we both found a couple of things to purchase...but certainly no more than that ;)

When we finally made it to Grand Central we admired the constellations which decorated the ceiling, but then learned that New York's largest Apple store is located there inside the terminal. Who could resist? Certainly not us. Fortunately no large purchases were made before we found out there was a Holiday Fair being held inside the Vanderbuilt Wing of the Terminal 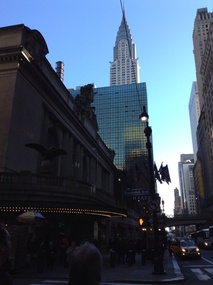 Grand Central with Chrysler Bldg
. Again, who could resist that?? There were many local, and not so local, Artisans displaying their wares and both Patti and I were able to find a few things that suited our needs. Yes, you read that right...needs...cause there was certainly no frivolous spending done by either of us!! I'd recommend anyone in the area before Christmas check this one out. The booths are filled with beautiful items, but be sure to bring your credit card, and maybe even that backup card that you keep for emergencies, because the prices are a bit steep. It seems the Artisans in this area demand a much higher price for their wares then they do back home. But everything is very unique, and there just might be something there suiting your taste and worthy of that little extra coin.

This afternoon we enjoyed a musical called Kinky Boots. It was very entertaining, and our seats were good, but it seems the theatre didn't pay their heating bill because it was cold, cold, cold. It felt like we were situated under an air conditioning vent which blew continuously throughout the performance, even though it was quite chilly outside. I understand they have to keep it relatively cool for the performers and their voices, but really...is it necessary to freeze out the audience? It might just have been the fact that our seats were near a door which led directly outside which made it very easy when the curtain came down for a quick exit.

We grabbed a bite near the theatre at a place called the Iron Bar and Grill. We both had salad and pizza, and although Patti really enjoyed her pizza, I felt mine was nothing to write home about. Largely because it wasn't very hot when it was served. All in all, a very unmemorable meal, in my opinion.

Enroute back to the hotel for a little break, and a chance to get warmed up, I picked up a cannoli and ate it in the room. Never miss an opportunity for desert! I think that'll be my new motto...well, until the diet starts again, that is.

Tonight we were off to see a movie. We wanted to experience everything there was to see and do here in NYC...and besides, it was too cold to be outside, and all the theatre tickets we wanted were either sold out or way too expensive. I am here to tell you that movies in New York City are just the same as back home....only you have to go up a lot more escalators and pay a lot more for admission and popcorn. But, at least we can say we experienced everything the Big Apple had to offer.

Tomorrow it'll be up early and off to the airport.

Enjoyed your great adventures, so expect you are planning your next trip next year when you can take it those that you missed. I would have enjoyed Macy's, years ago when I was in Boston, I loved it but didn't care for the rush, grab and pushing. Maybe it is different there after all my adventure was many many years ago.

Patti and I are thinking of making this a bi-annual adventure...so looks like it'll be 2015 for the next one!